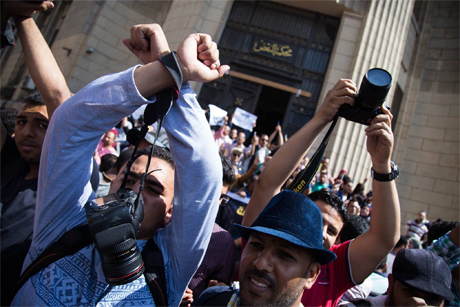 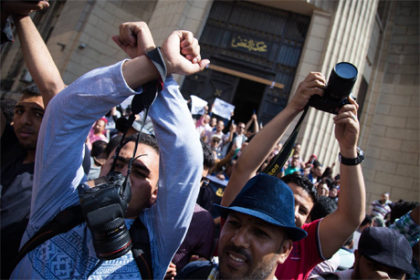 Hundreds of journalists Thursday marched through Cairo, from the Press Syndicate headquarters in central Cairo towards the attorney general’s office where they filed a complaint against the interior minister for the arrest of their colleagues during the Monday protest and against police brutality.

The marchers holding up pens and cameras chanted slogans against security forces and filed a complaint against Interior Minister Magdy Abdel Ghaffar and the head of Cairo Security Directorate for police misconduct against journalists on April 25 planned protest.

Some 46 journalists were arrested during the police crackdown on the protesters on Monday, the Press Syndicate said at a press conference. More than 230 people were also arrested and carried away by security forces, reports say.

“What happened during April 25 demonstrations cannot be tolerated, and those responsible for it must be held accountable,” said the Journalists Syndicate Chairman Yehia Qalash.

Hundreds of Egyptians defied the government’s warnings on Monday and protested against the transfer of the Red Sea Tiran and Sanafir strategic islands to Saudi Arabia.

Egyptians accuse the President of trading the Islands for Saudi aid. Al-Sisi slammed the accusations saying he only returned to Saudi Arabia what belonged to it.

The Egyptian cabinet argued that the Islands were placed under Egypt’s protection in 1950 for fear Israel might attack them.