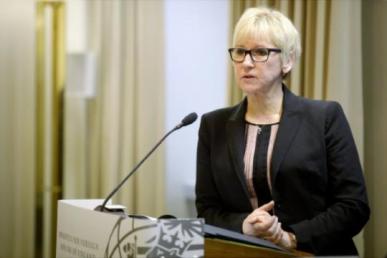 Swedish authorities are seriously considering threats against Foreign Minister Margot Wallstrom after an Israeli journalist wished her death following her criticism when she called for investigations in Israel’s killing of Palestinians, reports say.

“There are security people looking at this issue and we have no more comment than that,” Kristian Brangenfeldt, a spokeswoman for the Foreign Minister said.

Bernadotte was sent by the UN Security Council to mediate Israel-Palestine conflict in 1948. He angered Israelis when he recommended the withdrawal of Israeli forces and return of Palestinian refugees. He was later killed in Jerusalem in September 1948.

Foreign Minister Wallstrom last month irked Israel after she accused Jerusalem of frequent and mass killings of Palestinians and called for an independent probe into the killings to hold those responsible accountable.

“It is vital that there are thorough, credible investigations into these deaths in order to clarify and bring about possible accountability,” Wallstrom had said.

Israel reacted angrily, condemning Wallstrom for her comments deemed outrageous, immoral and stupid. The Israeli Foreign Ministry manned by Prime Minister Netanyahu indicated that it would ban Wallstrom and her deputy from travelling to Israel.

North Africa Post's news desk is composed of journalists and editors, who are constantly working to provide new and accurate stories to NAP readers.
NEWER POSTLibya: France rules out military intervention against IS
OLDER POSTTunisia: Ministry claims progress in fight against terrorism