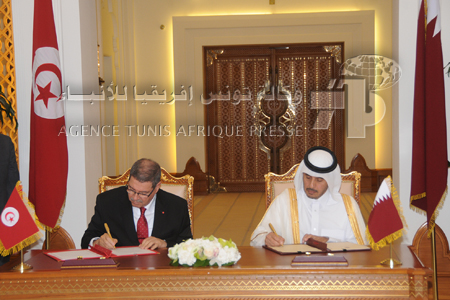 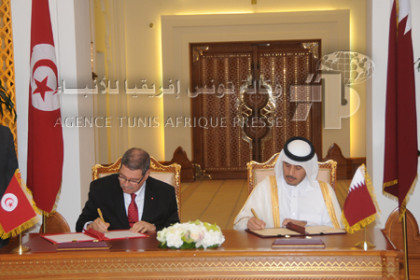 Tunisia and Qatar Wednesday during the 6th session of the Tunisian-Qatari High Joint Committee in Doha inked several agreements and the Memoranda of Understanding (MoU) including military co-operation between the two countries aiming at tackling terrorism in the region.
The agreements cover a range of fields including digital communication, culture and art, media cooperation and handicrafts.
According to the agreements Qatari will fund digital communication network at the ministry of interior. Both countries will also inter-exchange expertise in culture and art cooperation which will also be expanded to handicrafts.
Both countries also put a lot of stress on military co-operation which will address security in Tunisia and across the whole region taking into account the scourge of terrorism and expansion of the Islamic State (IS).
Tunisian Prime Minister Habib Essid taking the floor at the signings indicated that Tunisia counts on the completion and application of the agreement on military and security co-operation to ensure successful democratic and economic processes still rocked by insecurity marked by terror acts.
He also argued that in the face growing terror threats in the region, both countries should step up consultations and work to co-ordinate positions in the fight against terrorism to protect the two countries and participate in regional and international campaign aiming at weeding out terrorist groups in a bid to guarantee stability in the region and around the world.
The 6th session of the High Joint Committee also gave way to several Memoranda of Understanding covering exchange programs between Diplomatic Institute of Studies and Training in Qatar and the Diplomatic Institute of Studies and Training under the Foreign Affairs Ministry in Tunisia; understanding between the Qatar Central Bank and the Central Bank of Tunisia.
Tunisia and Qatar also signed MoU in human resources and administrative training between the Qatari Ministry of Administrative Development and the Tunisian Technical Co-operation Agency, and in ICT.