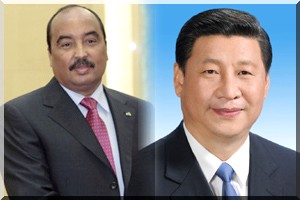 Nouakchott looks Up to China to unlock its economic potential

Mauritania, one of Africa’s poorest countries and newest oil producers, looks forward to developing its economic relations and partnership with China, a major world economic power.

Sensing the huge untapped resources of his country, Mauritanian President Mohamed Ould Abdel Aziz headed this week to China to explore the potentials of Mauritanian-Chinese partnership and identify the sectors where the countries can do better.

In Beijing, Mr. Ould Abdel Aziz met his Chinese peer Xi Jinping and discussed ways of enhancing cooperation between the two countries. The two Heads of state also reviewed latest developments in Africa and other international issues of common interests.

According to press reports, Mr. Xi Jinping pledged to maintain close contact with Mauritania and foster bilateral cooperation ties in the fields of culture, media, education and youth.

Beijing will share its experience in developing special economic zones and industrial parks with Mauritania, and will continue to dispatch medical teams and medical supplies to the nation, said the Chinese president.

Though it is an arid land, Mauritania is rich in mineral resources. The Northwest African country is the continent’s second biggest exporter of iron ore and a modest oil producer but its waters have some of the most abundant fish stocks in the world.

According to some experts, China is interested not only in Mauritania’s resources, but is expanding its economic presence in all African Continent. China has increasingly become an important economic player in Africa. Chinese investments in Africa span across many sectors and are not confined to Chinese government and large state-owned companies. Several private Chinese companies have also invested heavily in Africa.

For example, Huawei, a Chinese leading global telecom services provider, has invested a total of $1.5 billion and employs 4000 workers in Africa.

China’s share in Africa’s total trade has been phenomenal, rising to 13 pc from 3 pc a decade ago. China’s growing interest in Africa has been driven by the appetite for Africa’s natural resources to sustain its rapid growth. Currently, China imports one third of its oil from Africa, and some of its investments are tied to resource extraction.