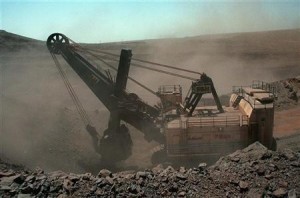 After Forte energy announced earlier on that it will begin its uranium survey drill at the A238 area in Mauritania during the first quarter of the year, Charter Pacific Corporation has also announced that it will be embarking on a reverse circulation drilling and trenching program at its Kaoua El Khadra Iron Ore project in Mauritania.
Forte Energy has already dug 28 holes since November. It said the results are being evaluated and the results will determine its definitive work plan. The company has been faced with financial problems recently which forced it to withdraw from the ASX stock market but a £10 million equity fund from Darwin Strategic put it back on its feet.
Meanwhile, Charter Pacific Corporation reverse circulation drilling and trenching program will take place in six marked areas. The drilling is being done in phases of a 1,000 meter trenching and 2,000m of reverse circulation. The first pass drilling will determine the thickness and grade of the resource base at the project, which has previously been identified as having a potential Banded Iron Formation exploration target of up to 4.4 billion tons.
The trenching technique will be applied to determine the mineralization width and grade. The company is already eyeing the establishment of parameters for the next phase of diamond drilling and metallurgical sampling. The program is based on Davis Tube Recovery test on surface rock samples that return concentrate recoveries of up to 56.1%.
Expectations are high and investment to ease the transportation of the resources by rail, port and road has been done by the Mauritanian government. The project will be competitive because the production costs of iron ore is expected to be about one third of those in Australia.