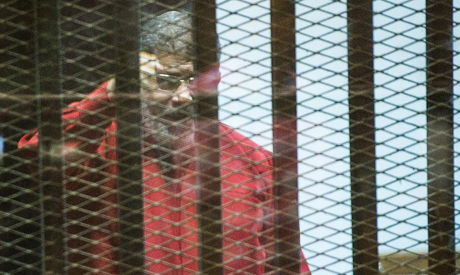 Egypt: Morsi appears in court in execution uniform for the first time 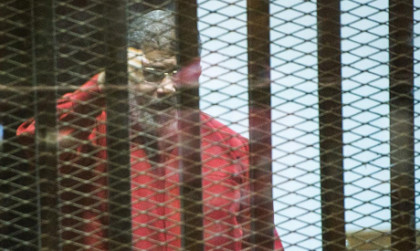 Former and first democratically elected president of Egypt Mohamed Morsi appeared on Sunday in court in execution uniform for another trial on charges of leaking secret documents to Qatar.

Last week, Morsi was handed death sentence on charges of mass prison break in 2011, for damaging and setting fire to prison, killing security personnel, looting prison weapons depot, and releasing inmates from the prison located in Cairo’s suburbs during the 2011 uprising.

The court also upheld charges against him for spying for Iran and militant groups including the Palestinian Islamist movement Hamas, several of whose leaders are based in Qatar. He has been handed life sentence with dozens of other Muslim Brotherhood members.

Meanwhile, Qatar last week joined in the round of international criticism to urge Egyptian authorities to release Morsi saying that his trial was politically motivated.

“Doha adds its voice to the countries calling for the verdict to be quashed and Morsi released,” said a statement published by the official Qatar News Agency.

“The death sentences against political dissidents in Egypt harm security and stability, and close the door to reconciliation and harmony.”

Relations between new Egyptian authorities and Qatar have been sour with al-Sisi regime accusing Qatar of supporting Muslim Brotherhood organization. Some members of the outlawed organization are still hiding in Qatar.

Other countries of the Gulf region namely Saudi Arabia, Bahrain, and the United Arab Emirates have been very critical of Qatar for supporting the Muslim Brotherhood. Saudi Arabia and other neighbors are supporting al-Sisi.