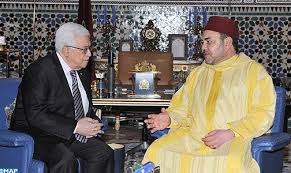 King Mohammed VI has flatly rejected any move that is likely to undermine the multi-religious aspect of Jerusalem or altering its legal and political status, as reports about US President Donald Trump’s imminent recognition of the holy city as the capital of Israel are becoming more frequent, and warned of the negative impact such a move would have on prospects for achieving a just, comprehensive settlement of the Palestinian-Israeli conflict.

King Mohammed VI, who is the Chairman of the OIC Al Quds Committee, reiterated in a phone call Tuesday with President of Palestine Mahmoud Abbas “Morocco’s strong and unwavering support for the brotherly Palestinian people in defending their just cause and legitimate rights, mainly concerning the status of Al Quds Asharif,” announced the Royal Office in a statement.

The King “voiced his flat refusal of any action that could undermine the multi-religious aspect of the holy city or alter its legal and political status,” the statement added.

The Palestinian president, on his part, hailed the King’s role and action, and deplored the fact that the American administration’s agenda includes such “inappropriate initiative”. He expressed the deep concern of the Palestinian authority over the serious consequences of this matter on the peace process in the Middle East and the region’s security and stability, the statement noted.

It added that the two leaders agreed to maintain direct contacts and continuous consultations on this issue, as well as a close coordination between the two governments to set, together, steps to take and actions to undertake.

In this connection,  King Mohammed VI also sent a message to President Trump expressing his own concerns and the concerns of Arab and Muslim countries over the persistent news of the UN Administration’s intentions.

The US Administration’s intention to recognize Jerusalem as the capital of Israel and to transfer the United States’ Embassy to that city, “would have a negative impact on prospects for achieving a just, comprehensive settlement of the Palestinian-Israeli conflict, particularly as the United States of America is one of the main sponsors of the peace process – one that enjoys the trust of all parties,” the Monarch pointed out.

North Africa Post's news desk is composed of journalists and editors, who are constantly working to provide new and accurate stories to NAP readers.
NEWER POSTKing Mohammed VI Deeply Concerned over US Plan to Move its Embassy to Jerusalem
OLDER POSTMorocco, Portugal Vow to Join Efforts in Favor of Africa’s Development Potential