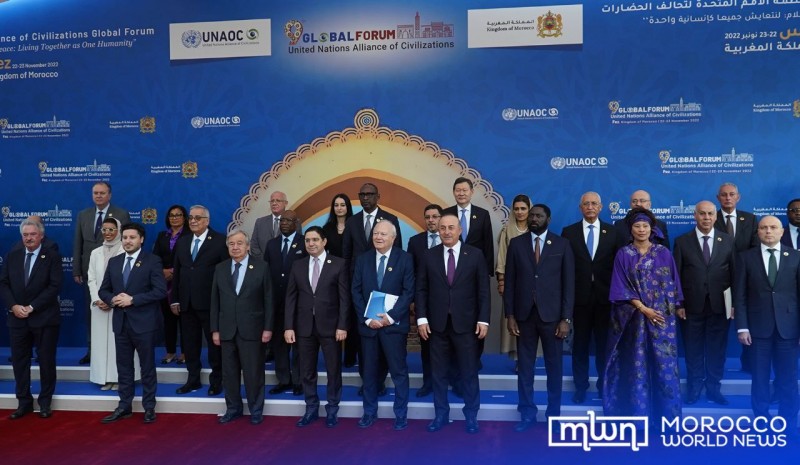 “Morocco has long been a champion of inter-faith dialogue and a leader in our fight against extremism”, said on Tuesday in Fez UN Chief Antonio Guterres in his opening remarks at the 9th Global Forum of UN Alliance of Civilizations.

“I would particularly like to thank His Majesty King Mohammed VI for his personal and permanent commitment to the defense of interreligious and intercultural dialogue, tolerance and diversity as a richness for our societies and our world”, added Mr.Guterres, who arrived in Morocco Monday to take part in the event.

“I also thank High Representative Moratinos for his stewardship of the Alliance. And I commend the inspired choice of Fez as the place of our gathering”, underlined the UN Secretary General, saying that the rich and ancient history makes Fez the ideal place to gather and reflect on the state of our world.

“Scanning the globe today, we see a world in crisis. The forces of division and hate are finding fertile ground in a landscape marred by injustices and conflicts”, he deplored, noting that divisions are widening – between rich and poor, North and South, and developed and emerging economies.

“Tensions – geopolitical, social, and economic – are rising”, added Mr. Guterres, saying that a growing number of conflicts – including the war in Ukraine – is devastating lives and undermining economies, while the cost-of-living crisis is hitting the most vulnerable people the hardest.

Furthermore, “trust, in political leadership and in one another, is crumbling. This breakdown in trust is leading to a breakdown in values”, said the UN Chief.

“Human rights and the rule of law are either neglected – or attacked outright. Hate speech, disinformation, and abuse are proliferating, targeting especially women and vulnerable groups”, while intolerance and irrationality are running rampant, added Mr. Guterres.

“And old evils – antisemitism, anti-Muslim bigotry, persecution of Christians, xenophobia, and racism – are receiving new leases on life”, said Mr. Guterres, affirming that these hateful and harmful afflictions feed off each other. They foment division and block collective action. All this, while our climate hurtles towards irreversible tipping points — a clear and tragic result of our inability to work as one, for the common good of all.

“We know that we need urgent action to prevent further instability and hunger – from the Horn of Africa and the Sahel to Afghanistan to Haiti and beyond. And we know that to halt the proliferation of conflicts, we need to strengthen prevention and build the foundations of lasting peace”, said the UN Secretary General.

“The Alliance of Civilizations is helping show the way”, said Mr. Guterres as the Alliance embodies the core values enshrined in the UN Charter, promotes more resilient and cohesive societies by putting a spotlight on Youth, Education, Media and Migration, and the vital role of women as peacemakers.
The Alliance is also working to build bridges and help people move from conflict to collaboration, underlined the UNSG, paying tribute to religious leaders across the world who are joining hands to promote dialogue and interfaith harmony.

“We need this spirit more than ever. Together, we can build an alliance of peace that spans the global and the local to meet the tests of our time if we recognize diversity as richness, invest in inclusion; And if we make sure that all of us – regardless of race, descent, origin, background, gender, religion, or other status – can live lives of dignity and opportunity”, affirmed Mr. Guterres.

The High Representative of the UN Alliance for Civilizations (UNAOC), Miguel Ángel Moratinos, on his part said during the opening session of the Forum that the Alliance should be an initiative that studies and discovers the similarities and synergies that exist philosophically, religiously and practically between different cultures and religions, while helping to distinguish and identify their differences.
Moratinos explained that these differences must be resolved in an open dialogue and in a peaceful manner in order to find solutions and avoid that they are manipulated and used as a source of controversy.

Therefore, the Alliance of Civilizations can precisely serve as a platform to facilitate the understanding and respect of each of our cultures and civilizations, which need each other anyway to survive in the future, he added.

“We, citizens of the world, should be able to express ourselves with a sufficient level of maturity and development and make a leap towards building a terminology and a positive political action. In the face of negative concepts and attitudes, we must defend a new positive vocabulary,” stressed the UN official.

The world, he noted, is not witnessing a clash of civilizations, but a clash of interests and ignorance, as well as clashes and struggles for hegemony and to obtain areas of influence, which it is necessary to combat through a dialogue and a meeting of civilizations.