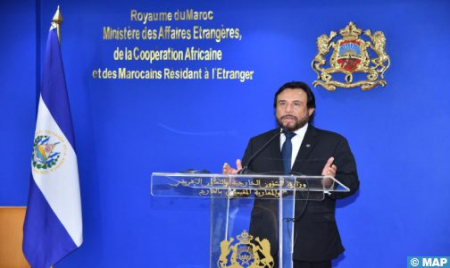 Visiting Vice President of El Salvador, Felix Ulloa, said on Monday in Rabat that his country has always backed the Kingdom’s sovereignty over its southern provinces. He reiterated El Salvador’s support to Morocco’s territorial integrity and to the autonomy plan as the “only solution” to the Sahara regional dispute.

Ulloa told the media that during his talks with Foreign Minister Nasser Bourita he expressed his country’s willingness to strengthen its support for the Moroccan Sahara issue, both within the United Nations and bilaterally.

He recalled that this position was “clearly expressed in 2019” on the occasion of the visit made by the Minister of International Relations of El Salvador, Alexandra Hill Tinoco, to the Kingdom.

Alexandra Hill Tinoco had then reaffirmed El Salvador’s support to the Moroccan Sahara and the autonomy initiative, proposed by the Kingdom, calling it the “only solution” to this regional dispute.

The official had also highlighted the “final withdrawal” of her country’s recognition of the “puppet SADR entity”, ensuring that this decision, taken by President Nayib Bukele, is an illustration of the willingness of El Salvador to open up to the Arab world, and in particular to Morocco.

El Salvador considers that the Autonomy Initiative is “the only basis for a realistic, viable and serious solution, within the framework of full respect for the territorial integrity of the Kingdom of Morocco and its national sovereignty over its southern provinces,” emphasized the Joint Declaration issued, in 2019, at the end of the working visit of the head of the Salvadoran diplomacy.

The Salvadoran government “supports the serious and credible efforts” made by Morocco to seek a “realistic, pragmatic and lasting political solution to this regional dispute, which is based on compromise,” the Declaration added.

Vice President Felix Ulloa also underlined at the press briefing that the dynamism marking bilateral relations has prompted the two sides to open embassies in their respective countries, recalling that Alexandra Hill Tinoco visited Morocco last October and inaugurated the Embassy of El Salvador in Rabat, the first of its kind in Africa.

The strengthening of ties between the two countries has led to the launch of a series of initiatives to consolidate cooperation relations, he said, citing as an instance the signing of a twinning agreement between the capitals Rabat and San Salvador, as well as the exchange of visits between parliamentary and business delegations of both countries.

He also expressed his thanks to the Kingdom for the financial and technical assistance provided to his country in order to launch a set of projects in the sectors of agriculture and livestock and new technologies.

The Salvadoran official stressed further the need to establish a new roadmap with a view to consolidating bilateral relations and joint cooperation in the respective regions of the two countries, expressing the readiness of his country, “which will always stand by the Kingdom”, to support the accession of Morocco to the Central American Integration System and defend its interests.

El Salvador is aware of the importance of the Kingdom as a gateway to Africa, said the Salvadoran Vice President, who will hold talks with several Moroccan officials during his current visit to Morocco.