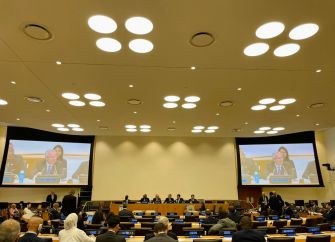 Morocco has called on the Non-Aligned Movement to contribute to a new world order dedicated to joint action that consolidates collective security and responds to current and future challenges.

Addressing the ministerial meeting of NAM, convened in New York on the sidelines of the 77th session of the UN General Assembly, Foreign minister Nasser Bourita reaffirmed his country’s steadfast commitment to strengthening international peace and security and fostering regional economic integration.

He voiced Morocco’s adherence to a multilateral system, based on cooperation and pragmatism, while ensuring that national policies are in harmony with the UN agenda, citing in this regard Moroccan project launched for the manufacturing of anti-epidemic vaccines to meet national and African needs.

On the Sahara issue, Bourita said that Morocco continues to work for a peaceful resolution of this regional dispute within the framework of its sovereignty and territorial integrity, under the exclusive auspices of the United Nations.

Morocco remains convinced that the resolution of this artificial dispute will strengthen regional stability, spur sustainable development and protect North Africa and the Sahel from the dangers of separatism, balkanization, extremism and international terrorism, underlined the FM.

“If the international community calls for a realistic, pragmatic, sustainable and consensual solution to this regional conflict, and if the Moroccan autonomy initiative is supported by the international community as the only serious, realistic and credible proposal, then Algeria must shoulder its responsibility and abandon its double rhetoric,” he said, calling on Algiers to engage seriously and constructively in the political process of round tables sponsored by the United Nations.

Morocco continues the socioeconomic development of its southern provinces and the advanced regionalization project to ensure the inhabitants of the Moroccan Sahara manage their own local affairs in democracy and stability, added Mr. Bourita.

He voiced Morocco’s deep concern over the catastrophic humanitarian situation prevailing in the Tindouf camps, where Algeria has abandoned its responsibilities and delegated control of the sequestered population to a separatist armed group, in blatant violation of international humanitarian law.

North Africa Post's news desk is composed of journalists and editors, who are constantly working to provide new and accurate stories to NAP readers.
NEWER POSTSahrawi Movement for Peace advocates Sahrawi-Sahrawi dialogue for a peaceful solution in the Sahara
OLDER POSTUN Secretary General voices appreciation for Morocco’s cooperation with his personal envoy for Sahara