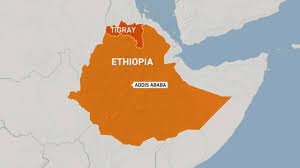 Eritrean troops have been accused of launching a “full-scale offensive” supported by Ethiopian forces, raising international concerns that the reignited war in Ethiopia’s Tigray region could quickly escalate.
Eritrean and Ethiopian officials have yet to comment on the reports that Eritrea is mass-mobilizing its reserve troops and that Ethiopia has been behind a series of airstrikes this month that hospital officials say killed Tigrayan civilians. But the US special envoy for the Horn of Africa, Mike Hammer, said at the end of his third visit to Ethiopia last week that Eritrea must stop interfering with its neighbor’s internal affairs. “We’ve been tracking Eritrean troop movement across the border, they are extremely concerning and we condemn it,“ Hammer said. “All external foreign actors should respect Ethiopia’s territorial integrity and avoid fueling the conflict. We couldn’t be any clearer. We’ve said this repeatedly.“
Eritrea supported Ethiopia when the war between Ethiopia and the TPLF broke out in November 2020, prompting Tigray officials to accuse Eritrea of committing rights violations against its people, a claim it denies. Some experts say that Eritrea’s mobilization of troops has been brought about by the government’s fear of conflict spreading into its territory. A report released Monday (19 September) by the United Nations Human Rights Council accused all sides of the Tigray conflict of crimes against humanity. It warned that resuming the conflict increased the risk of more crimes against the population. The UN investigators said some violations include extrajudicial killings, starvation, rape and sexual violence.