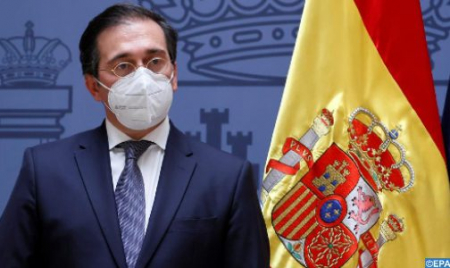 Spanish Minister of Foreign Affairs José Manuel Albares reaffirmed that his country has a “very solid relationship” with Morocco.

“We have a very solid relationship with Morocco that benefits Spain,” said the head of Spanish diplomacy Thursday at a press briefing in Seville with his Portuguese counterpart, Joao Cravinho.

The dynamic that is developing with Morocco has allowed, among other things, to reduce migration flows to the Peninsula, in addition to the resumption of the “Marhaba” operation, he noted, adding that ties with Morocco are an example for other countries in the region.

“At a time when all the irregular immigration routes used by the mafias which traffic in human beings are increasing in Europe, the only route that is not increasing but decreasing is precisely the one that, through the Strait of Gibraltar, reaches the coasts of Andalusia”, said Albares.