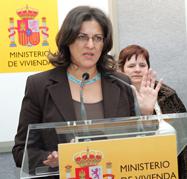 Ceuta & Melilla, relics of the past & offense to Morocco- Says former Spanish minister

María Antonia Trujillo, former Spanish housing minister, urged her country to review its position on the two enclaves in northern Morocco Ceuta and Melilla whom she described as “relics” of colonialism and an “offense to Morocco’s territorial integrity.”

Keeping the two cities under Spanish occupation was “prejudicial to Morocco’s political and economic independence and to bilateral ties,” she said.

“If Spain had changed its position on the Sahara, why not do the same with the two enclaves,” she said.

The seminar was chaired by former Spanish PM Zapatero who also welcomed his country’s position in support of Morocco’s autonomy plan to end the Sahara dispute.

Morocco had turned the page on a year-long dispute with Spain last March when Madrid said the autonomy plan was “the solution” to the Sahara issue.