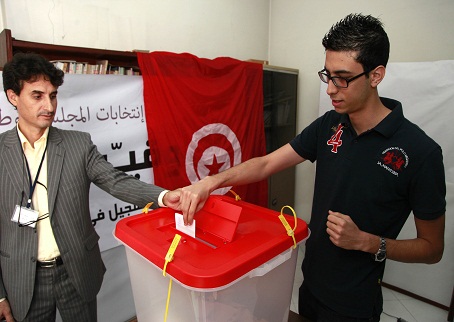 Parliamentary and presidential elections are fast approaching in Tunisia but eligible voters seem to be less enthusiastic about it. Almost half of the 8million voters registered for the last parliamentary elections held in 2011. The authorities are struggling to encourage the remaining half in the upcoming elections. Voters are claiming that they have been disappointed by the previous government while others deplore the lack of concrete ideologies coupled with unending fusions of political parties.

Parliamentary elections will be held on October 26 and November 23 has been set aside for the presidential election; and the second round if need may be will be on December 28. The Independent High Authority for Elections in Tunisia revealed that less than 800,000 of the remaining 4million have registered thereby obliging them to organize a second registration period from August 5 to 25.

Souhayel Hedfi, vice president of JID-Tunisia (Independent Young Democrats of Tunisia), a non-profit organization that advocates for democratic participation stated that more people registered after the mid-July attack on Tunisian soldiers in the Chaambi Mountains. Prior to the attack, the newly registered voters were less than 150,000.

Rania Jasmine, a 24-year-old university student, voted in the 2011 elections but she has decided not to participate in this year’s elections because she doesn’t trust the political parties. Jasmine said the Ennahda party which she voted for was “afraid of the opposition” which “really disappointed” her.

Hamza Zaghoud, a 25-year-old translator from Al-Kaf, thinks that “all of the political parties are way too similar” and the youth seem to be sidelined.

An undecided voter, 31 year old Ayman Mubaraki, underlined that the elections are very important. He said its success could serve as an encouragement and an example to other Arab countries.