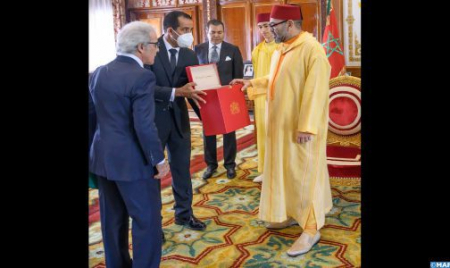 King Mohammed VI received Saturday at the Royal Palace of Rabat, Abdellatif Jouahri, Governor of Bank Al Maghrib, who presented to the Sovereign the central bank’s annual report on the economic, monetary and financial situation for the year 2021.

In an address before the Monarch, Jouahri said that despite a difficult international context, the Moroccan economy achieved an outstanding performance in 2021, with a growth rate of 7.9 percent, thanks to the vaccination campaign which registered an exceptional progress and to the economic recovery program launched by the King, in addition to the continued monetary and fiscal stimulus and favorable weather conditions.

The Governor said this recovery has led to a significant increase in tax revenues, which contributed to reduce the fiscal deficit to 5.9 percent of GDP, while the improvement in the labor market was only partial.

He explained that foreign trade, on the other hand, increased significantly, and remittances reached a record level of 93.7 billion dirhams, which allowed containing the current account deficit at 2.3 pct of GDP. He added that the official reserve assets of Bank Al-Maghrib amounted to the equivalent of 6 months of imports. The inflation rate reached 1.4 percent instead of 0.7 percent a year earlier, affected mainly by external pressures.

Jouahri indicated that, in this context and in order to support the economic recovery, Bank Al-Maghrib maintained the accommodative stance of its monetary policy and extended the measures put in place during 2020 in response to the crisis, which contributed to maintain the downward trend in interest rates and the relatively sustained growth of bank loans.

In the foreign exchange market, said the Governor, while the value of the dirham remained within the fluctuation range, the Bank continued its efforts to promote the awareness of economic operators, particularly small and medium-sized enterprises, about exchange risks.

The Governor concluded that thanks to the exceptional mobilization under the Royal leadership, Morocco was able to withstand the crisis and ensure a smooth transition towards the normality of the economic and social activity. He emphasized that this led to strengthening confidence and raising hopes for regaining and surpassing the pre-crisis economic and social achievements.

Nonetheless, Jouahri added, just as the world was about to enter the post-Covid era, the war started in Ukraine, aggravating the disruptions in trade, causing prices spike, and resulting in the deterioration of the economic outlook and the intensification of uncertainty.

This adverse international environment, asserted the Governor, makes it imperative for national public authorities to provide the necessary visibility to boost private investment and enhance the population adherence to the public decision-making.

According to Mr. Jouahri, this requires transparency in decision-making process and a clear communication on the choices made, besides regular and objective assessments of their implementation.

Yet, many projects underway do not sufficiently take into account these requirements, adds the Governor. The case of Education reform is a compelling example of this situation, as its implementation is impacted by several adjustments, which may undermine the necessary mobilization to achieve its ambitious goals.

On another level, said the Governor, the King launched the generalization of the social protection, an initiative lauded by many international institutions and partners.

For the success of this project and its achievement within the specified deadlines, the Governor stressed that it is vital to complete parallel projects, which would provide part of the necessary resources, such as completing the subsidy reform and the implementation of the Unified Social Register.
The Central Bank’s Chief also pointed out that the reform of the public pension funds is still partial and incomplete, while the financial balances of some of these funds are deteriorating alarmingly.

He also emphasized that there are other margins within several projects initiated by the King. This is the case in particular of the reform of state-owned institutions and enterprises, that aims to improve their efficiency and their contribution to boost investment, and the launch of Mohammed VI Investment Fund, which alongside the adoption of the Investment Charter, would give a new boost to the national productive fabric which so urgently needs it.

On another aspect and taking into account the tangible and considerable impact of climate change, Mr. Jouahri called for a change in paradigms in the policies adopted to fight against this phenomenon. It would be appropriate to adopt a holistic and firm approach that aims to place climate considerations as a fundamental pillar in every public or private action.

Concluding his address, the Governor said that the world is about to enter a new era marked by deep paradigm changes that the successive crises either triggered or accelerated.

It is therefore imperative that all stakeholders and the country’s vital forces mobilize behind the Monarch in a spirit where the national interest prevails over any personal, categorical or partisan consideration, so as to achieve the desired ambition to elevate our country to the ranks of the emerging economies.