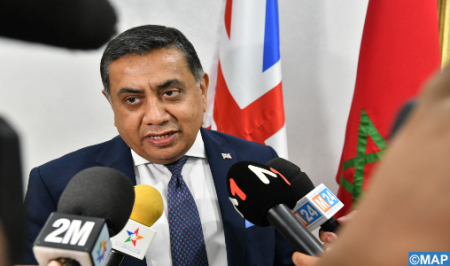 Morocco and the United Kingdom are building thriving partnerships, including in trade, green finance and education, said the British Minister of State for Foreign Affairs for South and Central Asia, North Africa, the UN and the Commonwealth, Lord Tariq Ahmad.

“Our kingdoms are working together to deliver a shared vision of economies that are innovative and focused on building a sustainable future, resilient to the global challenges we all face,” Lord Ahmad said in a statement issued Thursday at the end of the visit he paid to Morocco July 25 to 27.

The British official praised the leadership of King Mohammed VI and the vision of reform set out in Morocco’s New Development Model, as well as Moroccan efforts to support growth, stability and adaptation to climate change in Africa.

“I look forward to strengthening our economic ties, particularly between our financial centers in the City of London and Casablanca, to seeing the continued return of British tourists to Morocco, and to hosting the first UK-Morocco Association Agreement sub-committee on trade in London later this month,” he added.

During his visit to Morocco, Lord Ahmad met with the Minister of Foreign Affairs Nasser Bourita.

Following this meeting, Lord Ahmad tweeted that they “discussed regional issues including Libya and Ukraine.”

He also met the Minister of Industry and Trade Ryad Mezzour, the Minister of Higher Education, Scientific Research and Innovation Abdellatif Miraoui, and the Minister of Energy Transition and Sustainable Development, Leila Benali, as well as the Speaker of the House of Representatives.

According to the statement, discussions focused on deepening collaboration between the UK and Morocco in the areas of trade, education, climate, clean energy and green growth, as well as regional and international issues of common interest, including the situation in Libya, and the global implications of the war in Ukraine on food and energy security.

Lord Tariq Ahmad also held talks with financial regulators, bankers and investors, to celebrate the growing cooperation between the UK and Morocco and to mobilize private funds to support a low-carbon transition.

The statement further noted that Lord Ahmad also met with key British companies, ahead of the first meeting of the Moroccan-British sub-committee on trade, as well as with representatives of the British University of Coventry, which will soon start delivering UK-accredited courses in business studies and engineering in Bouskoura.

The minister seized the opportunity of his visit to meet with the secretary general of the Rabita Mohammadia des Oulémas, Ahmed Abbadi, and researchers from the Rabita to better understand interfaith efforts and religious freedoms.

In an interview with the news outlet “Morocco World News”, Lord Ahmad, referring to his meeting at the Rabita Mohammadia des Oulémas, highlighted the reputation Morocco enjoys in terms of religious tolerance, coexistence and moderate Islam. He underscored the North African country’s efforts in deconstructing extremist ideologies and promoting religious freedom.

“When we talk about moderate Islam, it is not moderation of Islam. It is actually the true essence of Islam, that needs to be promoted,” Lord Ahmad told MWN, recognizing the principles of moderate Islam present in Morocco.

He added that areas of cooperation between Morocco and the UK do not center solely around trade and sustainability, but also include opportunities for partnership in the fields of culture and education.

In his interview with MWN, he said that “the UK has a very good trade offer,” referring to the UK government’s development finance institution, British International Investment. The institution has an export finance facility of up to £4 billion (MAD 49.8 billion) “readily available to explore specific projects for inward investment into Morocco,” he said.

Highlighting the role of trade in economically empowering people, Lord Ahmad said: “I am a strong believer in the issue of taking forward economic empowerment of communities.” It is the role of the two countries to “get the ball rolling” and further build business relations, the British Official insisted.