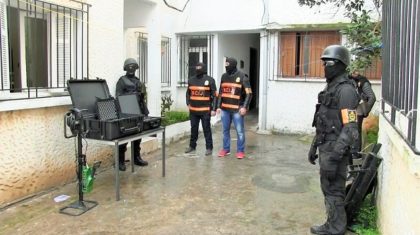 The Central Bureau for Judicial Investigations (BCIJ) dismantled the “”extremely dangerous terrorist” cell whose members were plotting attacks on “sensitive areas” in a scheme to undermine the security and stability of the Kingdom, the Interior Ministry said in a statement.

Local media broadcast video footage showing armed and masked members of the BCIJ surrounding a building in Fez where they arrested the cell members who were operating in different cities including Fez, Meknes, Khouribga, Casablanca, Zaouiat Sheikh, Sidi Bennour, Demnate and Sidi Hrazem, the statement said.

Morocco has been leading a proactive security approach aiming at averting terrorist attacks and busting terrorist cells before they move to action. The Kingdom has been spared deadly jihadist attacks since a 2011 bombing in Marrakesh’s famed Jamaa El Fna Square, which killed 17 people, mainly European tourists.