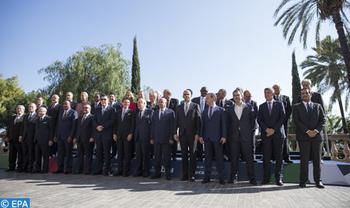 Morocco remains attached to a political, consensual and durable solution in Libya, a solution that would enable the North African country to recover its stability, within the framework of its indivisible unity, irrefutable sovereignty and full territorial integrity.

The statement was made by Moroccan Foreign Minister Nasser Bourita Tuesday in Palermo, during the international conference, organized by the Italian Populist government of Prime Minister Giuseppe Conte, this Nov.12-13.

The conference was meant to relaunch fresh talks between Libyan political protagonists to restore peace in the country and consequently stem the waves of migrants taking to the sea to join Italy among other European countries.

The Foreign Minister renewed Morocco’s readiness to offer its expertise to support Libya in matters of institutions construction, administrative restructuring and the country’s re-building.

He voiced hope that the Palermo Conference would help restore the spirit of consensus that had prevailed in Skhirat in 2015 and that was crowned by the signing of the Skhirat Agreement by all parties that took part in the inter-Libyan dialogue, held under the aegis of the UN support mission in Libya.

The agreement has been repeatedly described by the international community and by several Libyan stakeholders as the only unifying base for all Libyans and as a political framework for a transitional phase that would enable Libya set up legitimate and strong institutions.

Several participants in the Palermo Conference, including Russia’s First Deputy Chief of the Russian Government Staff, actually underlined that the Skhirat agreement remains the only viable basis for achieving a long-term solution to the Libyan conflict.

Nasser Bourita who pointed out that King Mohammed VI is closely following the situation in Libya noted that Libya needs concrete, coordinated and concomitant actions. The adoption of a constitution and an institutional architecture in line with the democratic choices of the people is a pressing need. It is a Libyan responsibility, he said.

The international community can support the process but certainly cannot interfere in the process, he said.

After two days of talks, UN Libya envoy Ghassan Salame praised a much higher level of conviviality among Libyan stakeholders. “So, I do consider this conference a success,” he said.

“Palermo was a milestone for Libyans to set a common framework,” Salame said, referring to the plan for a national conference and subsequent elections to be held in the first months of 2019.

Now the UN is targeting a national conference in early 2019 that would be organized to provide “a platform” for Libyans to spell out their vision for the future.

Seven years after the toppling of Gadafi, Libya remains divided with two rival parliaments – the internationally recognized Government of National Accord in the capital, Tripoli, and the eastern-based House of Representatives (HOR).

The UN and most of the international community support Fayez al-Serraj, the head of GNA. Al-Serraj, whose administration has been grappling with a prolonged security and economic crisis, has attempted to broaden the base of his political consensus in a bid to salvage his executive.

But the two contenders are not the only players in the Libyan chaos. There are various clans that have armed groups in their areas of influence.