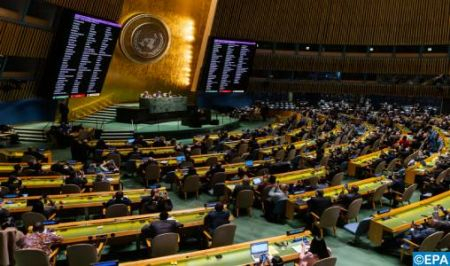 The United Nations General Assembly adopted, Thursday, a historic resolution tabled by Morocco and four other countries, recognizing access to a clean, healthy and sustainable environment as a universal human right.

Besides Morocco, the resolution was co-initiated by Costa Rica, Maldives, Slovenia and Switzerland. It received the support of 161 member states while 8 abstained.

The adoption of this text, which is the result of inclusive and lengthy negotiations, confirms Morocco’s role as a catalyst for multilateral efforts in favor of universal human rights.

The resolution follows a similar text adopted last year by the 47 member states of the Human Rights Council in Geneva, and gives universal recognition to this right through its adoption by the UN General Assembly in New York.

It calls on member states, international organizations and businesses to intensify their efforts to ensure a clean, healthy and sustainable environment for all.

UN Secretary-General António Guterres welcomed the “historic” decision, as a landmark development, demonstrating that member states can unite in the collective fight against the triple global crisis of climate change, biodiversity loss and pollution.

In a statement, the UN High Commissioner for Human Rights, Michelle Bachelet, also welcomed the Assembly’s historic decision and echoed the Secretary-General’s call for urgent action to implement it.

While thanking Morocco and the four other sponsors of the resolution, the UN Special Rapporteur on Human Rights and the Environment, David Boyd, stressed that this historic decision by the General Assembly will change the very nature of international human rights law.