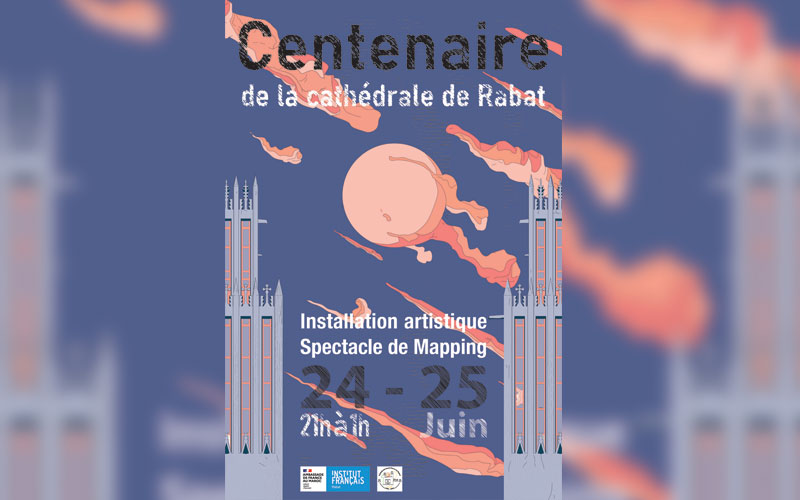 The Saint-Pierre Cathedral in Rabat celebrated this week its 100th anniversary with a mapping show inside the building, under the theme “Weave a Fire”.

The video show with sound effects was projected on an architectural installation in the form of an inverted candle, giving visitors visual experiences derived from representations of fire such as flames, ashes, smoke, heat, and lights.

The French Institute of Morocco, which co-organized the event in cooperation with the Diocese of Rabat said in a press release that “celebrating the 100th anniversary of the Cathedral means bringing the public together around the values of dialogue and sharing that characterize it.”

This light installation is a celebration of the past and future evolution of the monument with the city and the communities that co-exist there, said the IFM in a press release.

Head of the Cathedral of Rabat, Father Daniel Nourissat expressed, in a statement to MAP, his joy to see this show being celebrated inside the church to encourage people to enter and watch this candle and this light which symbolize the love of God in our hearts.

The French ambassador to Morocco, Hélène Le Gal, emphasized the symbolism of being in a cathedral in Morocco. “This openness to all religions, this is what makes it special and I find it very beautiful,” she said.

Saint-Pierre Cathedral, inaugurated on November 17, 1921, has accompanied and witnessed the great political, cultural and social changes in Morocco and is undeniably part of the cultural and historical heritage of the Capital.

It was designed by architect Adrien Laforgue, who had also drawn the Post Office in down town Rabat as well as the former Palais de Justice, which currently hosts the headquarters of the Moroccan Parliament. The monument is inscribed in an architectural tradition specific to the city of Rabat, a fruitful dialogue between the Arab-Muslim tradition and Western art deco modernism, explains the French Institute.