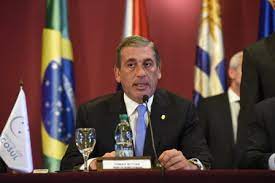 Speaker of Mercosur Parliament Tomas Bittar Navarro has commended the efforts deployed by King Mohammed VI for building closer ties between Africa, the Arab world and Latin America within the frame of the South-South cooperation, one of the cornerstones of the country’s foreign policy.

Bittar Navarro made the remarks Thursday in Montevideo following his meeting with Speaker of the Moroccan Parliament Upper House Enaam Mayara, on the sidelines of a symposium on climate change & the role of Latin American and Caribbean parliaments to mitigate global warming.

The President of Mercosur Parliament called on this occasion for enhancing further cooperation between Latin America, the African continent and the Arab world to counter common regional and international challenges.

He also said that time has come for the Moroccan Parliament Upper House to join Parlasur, the legislative body of the South American trading bloc. It is composed of 81 MPs, 18 from each member states of the bloc – Argentina, Brazil, Paraguay and Uruguay – and 9 from applying member Venezuela. Associate members – Bolivia, Chile, Colombia, Ecuador and Peru – may also hold seats in the Parliament, but with no voting powers.

For his part, Mayara voiced the wish of the Chamber of Councilors to join Parlasur as an observer member. Rabat, Morocco’s capital city, hosts the Headquarters of the permanent secretariat of the Parliamentary Forum of African, Latin American and Caribbean Countries, he said, noting that the North African Kingdom has already the status of an observer member in all regional parliamentary forums in Latin America.