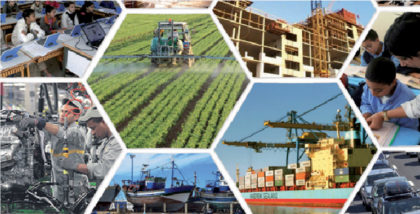 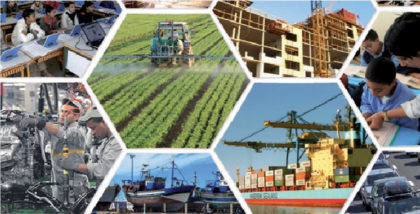 King Mohammed VI has put Morocco on track of social and economic development with the first twenty years of projects resulting in improved infrastructure but much remains to be done as the monarch himself stressed in his two recent speeches putting the country in a new trajectory of reforms to reduce disparities and improve public services.

At the political and constitutional level, the Monarch brought a new authority concept since his enthronement in 1999 marked by the strengthening of the rule of law, transparent and free elections and the adoption of a constitution in 2011 as well as the launch of the regionalization process.

Human rights were much improved in the country with the creation of watchdogs and the approval of international conventions as well as the equity and reconciliation committee during which past rights violations were addressed.

A series of landmark economic projects were launched notably in the fields of infrastructure with the achievement of the largest container-capacity port in the Mediterranean and the launch of leading energy projects putting Morocco on the global map of renewable energy leaders.

In terms of transportation, the highway network was broadened to cover all cities with more than 200,000 people and last year was marked by the launch of Africa’s fastest train linking the two economic hubs of Tangier and Casablanca.

But much remains to be done as the King made it clear in his Throne Day speech on July 29 citing notably social and territorial disparities. To remedy the situation, the King outlined a roadmap for a new Morocco to be built through a generation of new projects led by new leaders.

“Today, our resolve is greater than ever to press ahead with our efforts, to build on our achievements, to continue the reform process and to address the shortcomings revealed by past experience,” said the Moroccan Monarch.

The new Morocco according to the King’s speeches should be economically competitive to keep abreast of global developments in various fields and to offer better social services to its citizens.

In this respect, the setting up of an ad-hoc committee to elaborate a new development model will offer a participatory framework to put Morocco on track of much needed reforms in the fields of education, health, agriculture and investments.

The King said the decision to set up the committee was dictated by his keenness to add a new building block to the country’s development agenda, as part of a continuing process, and to revisit and update that model.

After he explained that the committee’s mission will be threefold: remedial, proactive and forward-looking, the Monarch emphasized “the national character not just of the Committee’s task, but also of its recommendations and of the development model we aspire to – a model that will be one hundred per cent Moroccan.”

The Monarch made it clear that what undermines the positive results of previous reforms is that the effects of the progress and the achievements made have not, unfortunately, been felt by all segments of the Moroccan society.

“Indeed, some citizens may not directly feel their positive impact on their living conditions, or in terms of helping them meet their daily needs, especially in the areas of basic social services, the reduction of social disparities and the consolidation of the middle class,” the King said, avowing that he suffers personally when a fraction of the Moroccan people – even if it were just one per cent of the Moroccan population – endures hardships and lives in poverty. “There will be no peace of mind for me so long as we have not properly tackled the hurdles faced and found the right solutions to development and social issues.”

Reiterating the particular importance he attaches to human development programs, social policies and the need to respond to Moroccans’ pressing concerns, the King acknowledged that this, however, cannot be achieved without a comprehensive vision, without qualified human resources or without meeting the conditions required to carry out planned projects.

“Morocco belongs to all Moroccans. It is our common home. We must, all of us, each in his or her respective field of competence, contribute to building our nation, ensuring its development and preserving its unity, security and stability,” the Monarch underlined, adding “We want a country that accommodates all its sons and daughters; a country in which all citizens – without exception – enjoy the same rights and have the same obligations, in an environment where freedom and human dignity prevail.”

In this vein, he insisted that the proposed development model needs to become “the cornerstone for the establishment of a new social contract in which all stakeholders will be involved…” and “to serve as the backbone of the new phase… a phase whose key features will be accountability and a comprehensive take-off.”

North Africa Post's news desk is composed of journalists and editors, who are constantly working to provide new and accurate stories to NAP readers.
NEWER POSTSudan needs up to $10 billion in aid—PM
OLDER POSTJapan reaffirms its rejection of separatism in Maghreb