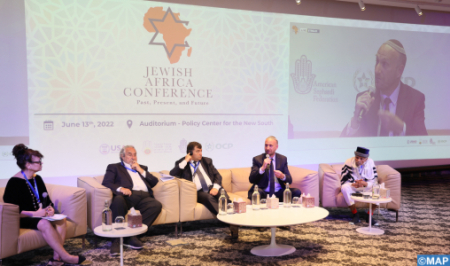 Signing of Rabat Appeal for Preservation of Judeo-African Heritage

The Rabat Appeal for the preservation of the Judeo-African heritage was signed on Monday within the framework of the second edition of the Jewish Africa Conference, held this June 13 to 15 under the theme “Past, Present and Future”.

The main objective of this appeal is to preserve the Jewish-African heritage, taking as example Morocco, which has developed, under the leadership of King Mohammed VI, a plan for the rehabilitation of 167 Jewish cemeteries and synagogues in the country. the Kingdom likewise takes the lead  in preserving and promoting Jewish identity through several initiatives, including the integration of Moroccan-Jewish culture and history in school textbooks.

The signatories of the Appeal call for the recognition by individuals, civil society and governments of the thousand-year-old history of the Jewish people in Africa and stress the need to preserve, rehabilitate and make accessible the Jewish historical sites throughout the continent.

They also call for strengthening the sacred bonds of memory that unite diverse peoples and generations to the African Jewish experience.

The second edition of the Jewish Africa Conference, initiated by the Mimouna Association in partnership with the Office Chérifien des Phosphates (OCP) and the United States Agency for International Development (USAID), aims to enhance the value of African Jewish culture while creating opportunities for meetings and exchanges between the Jewish communities of the continent.

Addressing the gathering, Royal Advisor Andre Azoulay said: “Morocco is a modern country strongly committed to preserving the diversity of its cultural heritage, including its Moroccan Jewish heritage.”

“We have been committed, under the enlightened leadership of HM King Mohammed VI, to make the Kingdom a country where Muslims and Jews work together to preserve their national heritage,” he said.

Malcolm Hoenlein, Executive Vice-President of the Conference of Presidents of Major American Jewish Organizations, stressed “the importance of building bridges from our history to discover what we have in common.”

“The purpose of this conference is to build a common foundation of understanding to remind us of the old-age historical ties binding us,” he said.

In similar remarks, Jason Guberman, executive director of the American Sephardi Federation, said “the idea of this conference is to explore and share the fascinating history of Jewish communities in Africa.”

It is also an opportunity to enhance the Jewish experience on the continent and discover the beautiful achievements of Jewish communities despite the difficulties encountered, he added.

A ceremony of “Jewish leadership awards” was held on this occasion to reward personalities who have worked for the preservation of the Jewish-African culture. The award recipients are Malcolm Hoenlein, Rene Trabelsi, former Minister of Tourism of Tunisia, Shaun Zagnoev, President of the South Africa Jewish Board of Deputies, Jorge Pedro Mauricio dos Santos, Minister of Communities in the government of Cape Verde, Zevadia Belaynesh (Ethiopia) and Andrea Barry (Namibia).

The conference features a photo exhibition by Jaan Roth entitled “Jews of Ethiopia: A world of traditions and change”.

The first edition of the conference was held in 2019 in New York.

The Appeal was signed by Serge Berdugo, Secretary-General of the Council of Jewish Communities of Morocco, Shaun Zagnoev, President of the South Africa Jewish Board of Deputies and Magda Haroun, Representative of the Jewish Community of Egypt.

René Trabelsi, former Minister of Tourism of Tunisia, Malcolm Hoenlein, Executive Vice President of the Conference of Presidents of Major American Jewish Organizations, Professor Ephraim Isaac, Co-founder of the Department of African and African-American Studies at Harvard University, El Mehdi Boudra, Founding President of the Mimouna Association and Jason Guberman, Executive Director of the American Sephardi Federation, are also among the signatories of the Appeal.