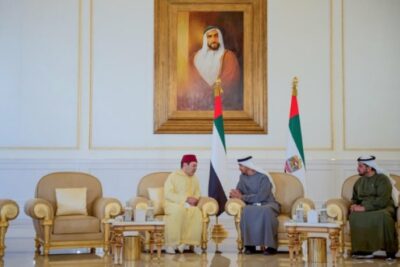 King Mohammed VI was represented by his younger brother Prince Moulay Rachid at the presentation of condolences in Abu Dhabi, following the death of Sheikh Khalifa bin Zayed Al Nahyan.

Prince Moulay Rachid presented, during the audience granted to him by Sheikh Mohammed bin Zayed Al Nahyan, the new President of the United Arab Emirates, the condolences of King Mohammed VI.

Following the death of Sheikh Khalifa, King Mohammed VI had sent a message of condolences to Sheikh Mohammed Bin Zayed Al Nahyan and later on had a phone call with him to express, on behalf of Morocco, King, Government and People, as well as to his illustrious princely family and to the brotherly Emirati people, “his deep condolences and sincere feelings of compassion following the cruel loss of a noble and brave Arab leader, bound to Morocco by solid ties of brotherhood and esteem,” the Royal office had in a statement.

King Mohammed VI also gave his highest instructions to declare a three-day official mourning in the Kingdom, starting from Friday, May 13, 2022.

During this three-day mourning, the national flag was flown at half-mast at government buildings, administrations and public places, and at Morocco’s embassies and consulates abroad, said the Royal Office in a statement.

North Africa Post's news desk is composed of journalists and editors, who are constantly working to provide new and accurate stories to NAP readers.
NEWER POSTMorocco puts Algeria in its place as real party to Sahara conflict at UN meeting
OLDER POSTMorocco’s OCP to set up phosphate fertilizer plant in Brazil