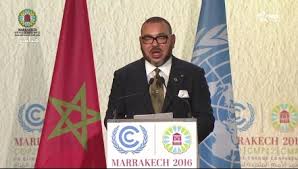 In a key note address at the opening of the high-level segment of the 22nd Conference of the Parties (COP 22) to the UN Framework Convention on Climate Change (UNFCCC), King Mohammed VI underscored Morocco’s environmental commitment and urged all countries of the globe to pool efforts to save the earth.

“The fact that Morocco is organizing this world conference for the second time after the 2001 session, reflects our commitment to approaching international challenges within a multilateral framework,” said the sovereign, describing COP22 as “a conference of truth and clarity” and a “a decisive turning point in the implementation process of the historic Paris Agreement.”

“The whole of mankind is pinning great hopes on the resolutions to be endorsed. It is expecting more than just a declaration of commitments and principles to curb greenhouse warming and mitigate its effects,” affirmed the Monarch.

He highlighted that climate change affects disproportionally some parts of the globe, particularly Africa and the small island states.

In light of the different priorities between developed and developing countries, the Sovereign called for unifying education on environmental issues and “providing the countries of the South, especially the least developed, as well as insular states, with such urgent financial and technical support as it will enhance their capacities and enable them to adapt to climate change.”

In this respect, King Mohammed VI urged advanced countries to honor their commitments to mobilize 100 billion dollars at least, by 2020 as part of the implementation of the Paris Agreement.

He emphasized the need for all the parties to facilitate “the transfer of technology, and work for the development of research and innovation in the field of climate,” adding that “governmental players, including companies, local communities, NGOs from civil society,” should give strong impetus to the Global Climate Action Agenda.

In his speech, the King highlighted Morocco’s unwavering commitment to uphold its commitments to implement the Paris agreement saying that the Kingdom was “among the first countries to announce their intended Nationally Determined Contributions”

Morocco “has pledged recently to reduce the rate of emissions.

In addition, it has taken concrete steps to ensure that 52% of the national energy supply comes from clean sources by the year 2030,” the King went on to say.

He noted that COP22 will be “a true test to gauge the efficiency of the commitments we have made as well as the credibility of the parties that announced them.”

“The time has come to redress the situation. We have no alternative but to work to make up for lost time, through continued, comprehensive mobilization and positive harmonization, so that the coming generations may lead an enjoyable and dignified life together,” said the Monarch.