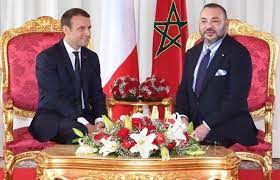 King Mohammed VI has sent his congratulations to French President Emmanuel Macron on his re-election and victory over far-right rival Marine Le Pen.

In his message, the Monarch wished Macron success in his mission and hailed the depth of the multidimensional ties existing between the Moroccan and French people.

By winning a second term after beating far right challenger Marine Le Pen by 58.5 per cent to 41.5 per cent, Macron, a pro-European centrist, becomes the first incumbent to be reelected in France in two decades.