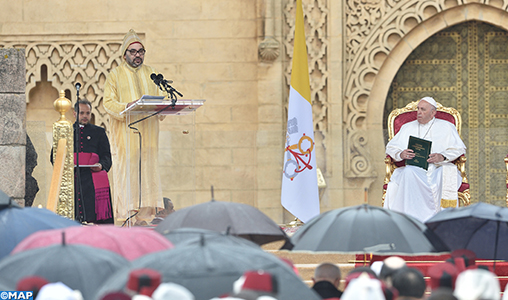 Inter-religious dialogue is not enough, Knowing one another will help rise up to the challenge of radicalism – King Mohammed VI 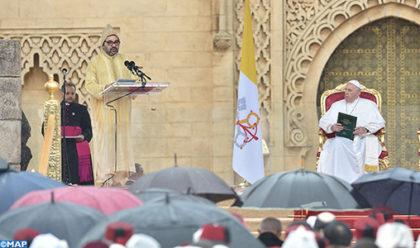 “Radicalism – whether it is motivated by religion or not – is due to failure to know one another, to ignorance of the other, and to ignorance pure and simple,” said King Mohammed VI, Commander of the Faithful, pointed out Saturday in Rabat.

In a speech delivered at the Esplanade of the Hassan Mosque in the presence of Pope Francis who is on a two-day visit to Morocco, the Sovereign underlined that knowing one another eliminates radicalism – all types of radicalism. Knowing one another is precisely what is going to help us rise to the challenges of our tormented times.”
To tackle radicalism, the solution is neither military nor financial; that solution has but one name: Education, the monarch said, noting that given the reality of today’s world, “it is clear the dialogue between the Abrahamic religions is insufficient.”

“My plea for education is an indictment of ignorance. It is binary conceptions and the fact of not knowing one another well enough that are threatening our civilizations; it is certainly not religion.”

The visit of his holiness Pope Francis is taking place at a time when the Community of Nations – just like that of all Believers – is facing a number of challenges, he said. Therefore, he added, “we need to tackle these new ills which feed on treachery as much as on the instrumentalization of the Divine Message by advocating the denial of the Other and similar wicked theories.”

In a world in search of direction, the Kingdom of Morocco has never stopped proclaiming, teaching and experiencing, on a daily basis, Brotherhood among the Sons of Abraham. This is a founding pillar of the exceptionally rich diversity underpinning Moroccan civilization, the Sovereign stated further.

The symbiotic relationship uniting Moroccans – beyond faiths – is an eloquent example in this regard, said the Commander of the Faithful. This symbiosis, which is a fact of life in Morocco, is reflected by the mosques, churches and synagogues which have coexisted in the cities of the Kingdom since time immemorial.

“As King of Morocco and Commander of the Faithful, I am the Guarantor of the free practice of religion. I am Commander of all believers,” the Sovereign pointed out.

“And, as Commander of the Faithful, I cannot speak of the Land of Islam, as if only Muslims lived there. I am keen to ensure freedom to practice the religions of the Book and I am the guarantor of that freedom. I protect Moroccan Jews as well as Christians from other countries, who are living in Morocco,” the King said.

In this regard, the Sovereign recalled the setting up of the Mohammed VI Ulema Foundation and the Mohammed VI Institute for the training of imams and male and female religious guides, which receives young people from several European and African countries. “Because God is love, I have tried to make sure my reign is characterized by closeness to citizens as well as by assistance to the poorest and most vulnerable people,” he said, recalling the launch 14 years ago of the National Initiative for Human Development (INDH) to improve the lives of people in precarious or fragile situations, integrate those who are excluded, put a roof over the heads of the homeless and kindle faith in a dignified future.

“That is also the philosophy behind the immigration and asylum policy which I have instituted and which is fundamentally based on solidarity,” the Sovereign said. He added that his meeting with his Holiness Pope Francis attests to a mutually held belief that the values of monotheism contribute to rationalization, to reconciliation and to improving the world order.

“As Commander of the Faithful, and just like Your Holiness, I am against all forms of indifference and I wish, in this respect, to salute the courage of the Leaders who do not shy away from the defining questions of our time,” the monarch underlined.

The Sovereign also said that he has been following with interest and appreciation the efforts made by the Pope to serve peace in the world, as well as his regular calls to promote education and dialogue, to end violence, to combat poverty and corruption, to tackle climate change – to fight the ills plaguing human societies.

“Our messages do not concern our time only; they are eternal. They call upon people to embrace the values of moderation, to fulfil the imperatives of knowing one another and to raise awareness of otherness.”