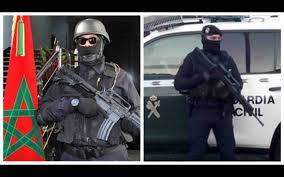 The report of the Yearbook of Jihadist Terrorism 2021, published by the International Observatory for Studies on Terrorism (OIET), positively assesses the “great efforts” made to maintain collaboration between Morocco and Spain on anti-jihadist issues despite the “still latent distrust” resulting from the differences between the two countries and the migratory crises, such as the one that occurred in Ceuta in May 2021.

These disputes, however, have not “interrupted the collaboration of the two countries against terrorism”, indicates the OIET report, underlining that the bilateral anti-terrorist cooperation between Spain and Morocco is “a success due to the overcoming of the said difficulties and the wide implementation of measures and agreements provided for this purpose.”

The evolution of these specific relations has caused the two countries to move from sharing data on cells or individuals linked to jihadism to forming joint teams and patrols, made up of Spanish and Moroccan troops, despite the absence of common legal frameworks, as is the case between European countries, explains the report.

Greater involvement of civil society – in addition to public, judicial and police institutions – is needed to stem the threat of terrorism and jihadist radicalization, OIET stresses.