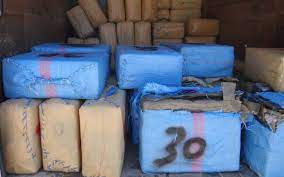 Policemen dismantled Saturday morning, on the basis of precise information provided by the General Directorate of Territorial Surveillance (DGST), an international drug trafficking network and seized 4,345 kg of cannabis resin.

Police interventions led to the arrest of two individuals, aged 31 and 32, for their alleged involvement in international drug trafficking activities by sea, said a statement from the General Directorate of National Security (DGSN).

The operations carried out in a farm 17 km north of the city of Es-Semara led to the seizure of a first shipment of cannabis resin, in addition to three inflatable boats, two motors and 9 canisters containing 60 liters of fuel each, a four-wheel-drive vehicle and a set of hunting cartridges.

The investigations led also to the discovery of an additional hiding place 50 km from the place of the first seizure, suspected of being used for the storage of drugs. Searches carried out there led to the seizure of 9 bundles of chira.

The suspects were taken into custody pending the investigation carried out by the prefectural service of the judicial police of Laayoune under the supervision of the competent prosecutor’s office, to identify the possible ramifications of this criminal activity and to arrest all the accomplices, the statement said.

This operation is part of the continuous efforts carried out by the national security services of Laayoune, in coordination with the DGST, to fight against criminal networks active in different forms of cross-border crime.

North Africa Post's news desk is composed of journalists and editors, who are constantly working to provide new and accurate stories to NAP readers.
NEWER POSTMorocco’s aid to Spain in the fight against terrorism has not been interrupted despite latent distrust – International Observatory
OLDER POSTTunisia: Capital punishment for sixteen jihadists involved in the Ben Guerdane bloody attacks in 2016