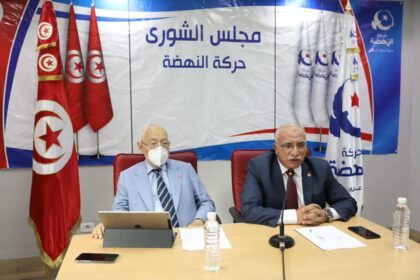 Ennahdha, the largest party in the Tunisian parliament, set up Thursday, a local committee tasked to find solutions to the political crisis that has gripped the country after President Kais Saied suspended the legislature and seized the executive power.

In a statement signed by the party’s leader Rached Ghannouchi, the Islamist movement stressed that the committee will “manage the political crisis and express its positive interaction in order to complete the broken democratic path.”

“More than two weeks after the presidential decisions of July 25 2021, the President of the Republic has not yet disclosed the road map he promised to end the exceptional phase and return to the normal state of work of state institutions,” the statement added.

Saied fired on July 25 Prime Minister Hichem Mechichi, seized the executive power and suspended for 30 days the parliament, using article of 80 of the constitution.

Saied described the move as necessary in order to restore the country gripped by deep political and economic crises that have stalled the country’s growth.

Ennahdha condemned Saied for the move that it branded a “coup”. “A joint effort must be made finally to get out of the crisis, so that our country confronts its urgent and future problems within the framework of national unity and the constitution,” the statement said.

The Ennahdha-founded committee will be headed by Executive Office member, Muhammad Al-Qumani.