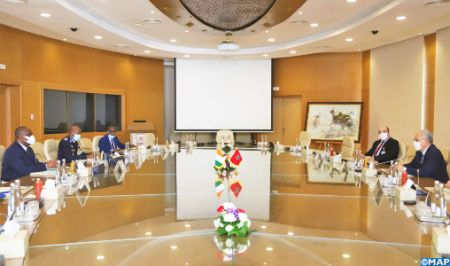 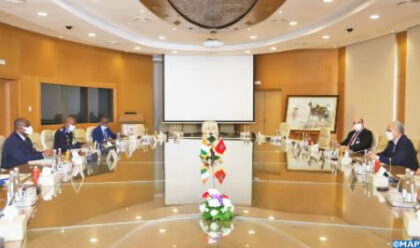 Means to bolster cooperation between Morocco and Côte d’Ivoire in military and defense matters were discussed at separate meetings in Rabat Friday by visiting Ivorian Defense Minister Téné Birahima Ouattara with Minister in charge of National Defense Administration, Abdeltif Loudyi, and with the Lieutenant General, Inspector General of the Royal Armed Forces, Abdelfattah Louarak.

The Ivorian official, who is on a working visit to Morocco this July 14 to 17, discussed with Abdeltif Loudyi various military issues and means to bolster bilateral relations in the field, said a press release from the FAR General Staff, adding that the two sides also reviewed ways of consolidating the ties of friendship between the two countries.

During the meeting, held at the instructions of the King, Supreme Chief and Chief of General Staff of the FAR, the two ministers expressed satisfaction at the level reached by bilateral cooperation relations in the military field, particularly through the various training activities and the exchange of experiences and expertise.

In this vein, the Ivorian official hailed the relevance of the multidimensional strategy, spearheaded by King Mohammed VI, to face the security challenges facing the region, favoring south-south cooperation. He also hailed Morocco’s efforts to launch regional integration projects and help build up health security on the African continent.

Later in the day, the Ivorian Defense Minister held talks with Lieutenant General, Inspector General of FAR, Abdelfattah Louarak on the assessment of bilateral military cooperation, which includes the exchange of information visits, and participation in various training sessions and courses.