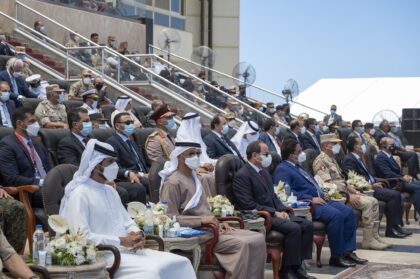 The Egyptian military says it is ready to face regional challenges as Ethiopia resumes filling the Renaissance dam considered a threat by the Arab Republic.
“It is not wise, in light of our capabilities and high deterrence power, to test the reaction of the Egyptian Armed Forces,” Gharib Abdel Hafez, a spokesman of the army said Saturday during the inauguration of a naval base on the Mediterranean Sea near Libya.
“Over the past few years, we have established multiple military bases, including the Mohammed Naguib Military Base in July 2017 — which is the largest military base in the Middle East — and the Sidi Barani Military Base,” he said.
The new base will secure the country’s vital goals and is involved in in research work, rescue operations and the prevention of illegal immigration.
The inauguration of the base comes amid regional diplomatic conflict with Ethiopia that analysts fear can escalate into an armed conflict. Both Egypt and Ethiopia are opposed to the Renaissance Dam project; a hydroelectric project worth $5 billion on the Nile that Egypt fears will cut down significantly its water sources.
Egypt’s irrigation minister said on Monday that he had received official notice from Ethiopia that it had begun filling the reservoir of the dam for a second year, Arab News reports. The minister Abdel Aty criticized the filling that Egypt regards as a threat to regional stability.
Ethiopia says the dam on its Blue Nile is crucial to its economic development and providing power to its population.