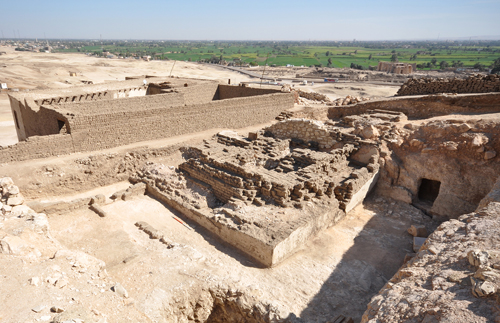 Archaeologists in Egypt have made a great discovery. They have discovered the pyramid of one of the most influential person during the era of the pharaohs. According to the minister for antiquities, Mohammed Ibrahim, a pyramid dating back to more than 3,000 years which was built for an advisor to King Ramses II has been discovered in Luxor, one of Egypt’s most ancient cities.

The discovery was made by a Belgian mission of the ‘’Universite libre de Bruxelles’’# and ‘’Universite de Liege’’# who have been excavating the hill of Sheikh Abdel Qurna where the founding was made. The pyramid is made up of large mud brick and its original height is estimated to be at 15metres.

The mission gave out some information regarding the history of their discovery in a released statement. It stated that “stamp impressions on the bricks indicate that the pyramid belongs to a vizier of Upper and Lower Egypt named Khay, who held this charge for 15 years during the reign of pharaoh Ramses II (1279 -1213 BC) in the 19th dynasty.” According to the mission, “the monument was largely dismantled in the 7th and 8th century AD, when the tomb was transformed into a Coptic hermitage.” The discovery is of major importance “since the vizier Khay was known to Egyptologists by a large number of documents but the location of his tomb remained undiscovered,” the mission said.

Luxor is known for hiding most of Egypt’s cultural heritage which are still waiting to be discovered. Known as the Thebes during the ancient days, the city is also a major tourist attraction spot worldwide and millions visit the place each year to discover its treasures although security has been of late an issue of concern.