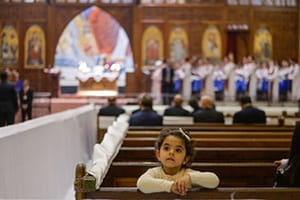 Egypt, home of the Middle East’s largest Christian community, has been the theatre of multiple acts of aggression on Churches putting the lives of many Christians at risk, said Open Doors Charity in a recent report.

According to Open Doors, 128 Christians were killed in Egypt for their faith and more than 200 were driven out of their homes in 2017. It attributed the rise in persecution to “the overspill of Islamic terrorists driven out of Iraq and Syria”.

Last Easter, two church bombings killed 49 people, and another 29 were killed when extremists attacked people travelling to a monastery in May. More than 15 girls in Minya governorate were kidnapped in 2017 to be forced to marry Muslims and convert to Islam, Open Doors said.

Christians in Egypt, mostly Orthodox, are complaining of discrimination in job market. University students for their part say they were given bad grades for their religion. Christian shop owners were boycotted and hospital patients were not given proper treatment, the report said.

About 10% of Egypt’s 95 million population are Christians. The overwhelming majority are Orthodox, with up to 1 million evangelical Christians and 250,000 Catholics.