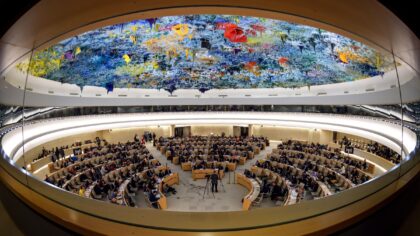 Ambassadors, Permanent Representatives of member states of the Support Group for Morocco’s Territorial Integrity in Geneva denounced, Wednesday, attempts by a small group of countries to politicize the debates at the Human Rights Council (HRC) to challenge the Kingdom’s sovereignty over its Sahara.

Speaking at a virtual meeting of the Group with the High Commissioner for Human Rights, Michelle Bachelet, Ambassador Kouadio Adjoumani of Côte d’Ivoire said that the objective of this meeting is to prevent any controversy and political instrumentalization of the Sahara issue in the Human Rights Council.

The Group’s statements have no political purpose and are based solely on the principle of solidarity, the diplomat said.

He recalled that the Sahara dispute is subject to a political process under the exclusive competence of the UN Security Council. Therefore, the resolution of the dispute can only take place within the framework of this body, he insisted.

For Adjoumani, the HRC is not the appropriate forum to discuss this dispute, which has already been referred to the Security Council and for which several resolutions have been adopted.

The Human Rights Council must remain faithful to its founding principle, namely the non-politicization of the debates, thus avoiding attempts to stir up controversy and instrumentalization of the Sahara issue within the HRC, he said.

In the same vein, the Ambassador of Gabon Mireille Nzenze said that the main objective of the meeting is to establish a constructive dialogue between the group and the OHCHR, noting that the approach aims particularly to recall the principles of bilaterality and non-politicization that govern the work of the HRC.

The group’s statement delivered at the 46th session of the Council was a neutral statement that did not include any political element that could offend any party.” It was a statement of principle for obvious reasons, as the Sahara issue is the subject of a political process, the exclusive competence of the Security Council,” she noted.

The Gabonese diplomat also highlighted the role played by the various commissions of the National Council for Human Rights in the southern provinces of Morocco, recognized by the Security Council.

The situation in the southern provinces is the subject of a very active interaction between the mechanisms of the Human Rights Council, which have made several visits to these provinces, Nzenze added.

The support given to Morocco aims to depoliticize this issue in the context of the work of the Human Rights Council, she said.

For his part, Jordan’s Ambassador Walid Khalid Obeidat noted that political aspects should not be dealt with through the HRC but rather through the UN Security Council, expressing his country’s support for the efforts made by Morocco in the exercise of its sovereignty.

This is a political issue that should not be discussed at the Human Rights Council, he said.

The Ambassador of Bahrain Yusuf Abdulkarim Bucheeri reaffirmed, on behalf of the Gulf Cooperation Council, the support to the efforts made by Moroccan institutions to promote and protect human rights throughout the territory, welcoming the continuous and constructive engagement with the human rights mechanisms, particularly the Office of the High Commissioner (OHCHR), the HRC and the Special Procedures.

The Bahraini diplomat reiterated his country’s support for the sovereignty and territorial integrity of Morocco, as well as for the measures taken in this regard, such as the one aimed at restoring freedom of movement at the border crossing of El Guerguarat.

Any provocation that aims to limit the freedom of movement in this vital space, cannot be tolerated, he said.

Also, he welcomed the opening of Consulates by many countries in Dakhla and Laayoune, describing this initiative as an important step in the commitment to strengthen economic development and investment for the benefit of local populations.

The GCC members are convinced that the Sahara issue can only be resolved through the Autonomy Plan submitted by Morocco to the UN Security Council.

For his part, Haiti’s ambassador Justin Viard recalled that his country has strengthened its relations with the Kingdom to the point of establishing a diplomatic mission and opening a consulate general in Dakhla last December.

Haiti reaffirms its support to this group whose objective is to prevent any politicization within the HRC, given that this issue falls exclusively under the remit of the Security Council.

As for Zambia’s ambassador Martha Lungu Mwitumwa, she said that her country takes note of Morocco’s serious and credible efforts as well as its initiative to find a lasting and peaceful solution under the auspices of the United Nations.

“Zambia notes the efforts made by Morocco in the economic development of the region since 1975, but also the evolution of human rights in this territory, which has become an African trade route,” she said.

In his remarks, Morocco’s Permanent Representative in Geneva, Ambassador Omar Zniber denounced the dishonest and malicious actions of Algeria and the separatists to mislead the international community in general and the Office of the High Commissioner in particular, on an alleged “special situation” of human rights in the Moroccan Sahara, while the reality is that the exercise of these rights is fully guaranteed in the southern provinces and throughout the national territory.