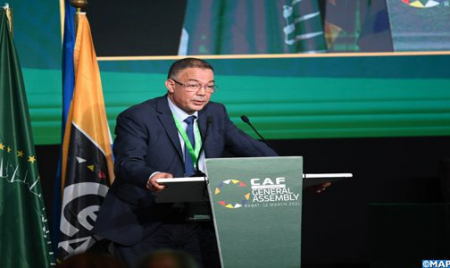 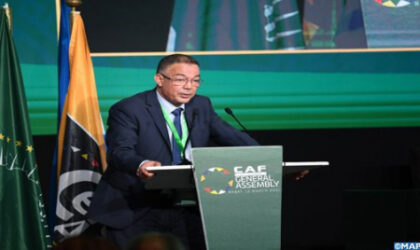 The president of the Royal Moroccan Federation (FRMF), Fouzi Lekjaa, was elected this Friday March 12 to the Council of the International Federation of Association Football (FIFA), an election that consecrates Moroccan sports diplomacy.

Fouzi Lekjaa was appointed member of the FIFA Council during the 43rd Ordinary and Elective General Assembly of the African Football Confederation (CAF), held this Friday in Rabat, in the presence of FIFA President Gianni Infantino.

The election of Fouzi Lekjaa is a première in the annals of Moroccan football, as he is the first Moroccan ever to hold such a position.

Lekjaa also serves as vice-president of the committee of organization of inter-club competitions and management of the club licensing system within CAF.

This election to the FIFA Council consecrates the efforts made by Lekjaa, a senior official of the Ministry of Finance, who managed to restore the image of national football.

His candidacy to the FIFA Council has garnered the unanimous support of all components of the Moroccan football world, without any exception.

Actually, since his election in 2014 at the head of the FRMF, Fouzi Lekjaa has brought new blood to Moroccan football, thanks to an efficient governance, comments le360 news outlet. Under his leadership, the national football team has become better organized, acquiring some of the best new infrastructures and improving existing ones, combined with a significant financial windfall.

Fouzi Lekjaa launched the reorganization of national football, at all levels, managing clubs, national teams and sporting bodies in line with the requirements of modern football.

The 43rd Ordinary and Elective General Assembly of the CAF was also marked by the election of a new president, South Africa’s Patrice Motsepe, the only candidate to replace the Malagasy Ahmad Ahmad at the head of CAF, after Ivorian candidate Jacques Anouma, Senegal’s Augustin Senghor, and Mauritania’s Ahmaed Yahia have all withdrawn their candidacies.

Patrice Motsepe, 59, who will sit at the helm of the CAF for five years, is the president of the South African club Mamelodi Sundowns FC.