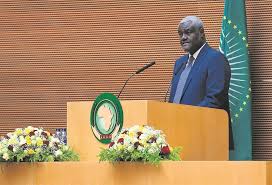 Chairperson of the African Union Commission Moussa Faki (Chad) has announced his candidacy for a second term in office at the end of his first four-year mandate, which started in 2017.

Mr. Faki seeks re-election for another 4-year mandate (2021-2024). He will present results achieved during his mandate during the Assembly of next AU summit due in Addis Ababa February 6 – 7.

The Chairperson of the AU Commission is elected for a four-year term, renewable once. Election is by secret ballot and a two-thirds majority of member states eligible to vote.

Mr. Moussa Faki is 5th official to serve at the Head of the Commission. He was preceded by Nkosazana Dlamini Zuma, (South African), Jean Ping (Gabon), Alpha Oumar Konaré (Mali) and Amara Essy, (Côte d’Ivoire). Mr. Amara served as interim for one year during the OAU–AU transition.

North Africa Post's news desk is composed of journalists and editors, who are constantly working to provide new and accurate stories to NAP readers.
NEWER POSTMorocco: Tourism revenues drop by half up to November
OLDER POSTTunisia’s FM tests positive to covid-19 as Tunis hunts down vaccine