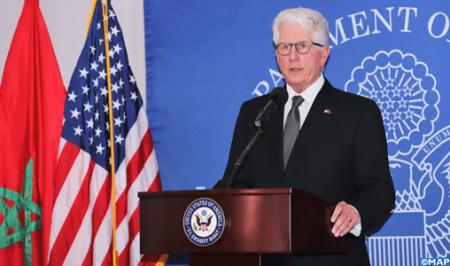 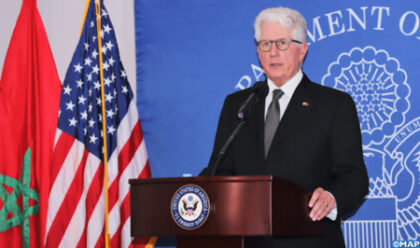 The outgoing US ambassador to Morocco, David Fischer, said he was confident “as to the future of Moroccan-American relations”, deeming that “they will be in safe hands”.

At a press conference Monday in Rabat marking the end of his mission in Morocco, the US ambassador commended King Mohammed VI for having guided US-Moroccan friendship towards an ever-closer partnership.

“I would like to thank His Majesty for the foundation he created to guide the US-Moroccan friendship towards an ever-closer partnership,” said Fischer, whose mission in the Kingdom will end in few days.

He said he was confident that under new President Joe Biden, relations between the two countries will be in safe hands.

“I am 100 percent sure that the incoming Biden administration will nominate a highly qualified individual to fill this ambassadorial post, someone who will build on all that we have done together, and that the United States and Morocco will grow and prosper together as we have for over two centuries,” the diplomat said.

Touching on the recognition by the United States of the full sovereignty of Morocco over its Sahara, the diplomat said this is a “natural development” of the stances of the US administrations since the beginning of the 2000s.

Asked about the possible stance of the administration of President-elect Joe Biden regarding the Sahara issue, Fischer said he was “convinced that we will all be satisfied”.

Fischer, moreover, said he was “very honored” to be the first US ambassador to visit the Moroccan Sahara, “after my government redrew our official map to recognize Morocco’s true borders.”

“We strongly support the autonomy plan, and we will work with the United Nations and all stakeholders to achieve the desired result,” said the diplomat, adding that “several countries in Europe strongly believe that the United States and the UN will eventually find a solution” to the Moroccan Sahara issue.

Regarding Moroccan-Israeli relations, Fischer said that the latest developments in this direction “are the result of long-term work”, adding that the teams of the two countries are working hard for the opening of the respective embassies once the administrative and legislative formalities have been completed.

The diplomat also stressed that the Israeli-Palestinian issue must be approached “with great tact”.

“Everyone agrees to support the two-state solution to move forward. We are eager to see progress in this direction, and to explore new ideas, and we support the United Nations in these processes,” he said.

North Africa Post's news desk is composed of journalists and editors, who are constantly working to provide new and accurate stories to NAP readers.
NEWER POSTWhy ejecting the Polisario from AU is only a matter of time
OLDER POSTAlgerian news agency continues its fake news monologue