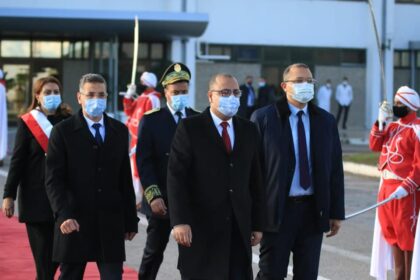 Tunisian Prime Minister Hichem Mechichi has interrupted his European tour and cancelled his trip to Italy after minister of Economy tested positive to covid-19, reports say.

Mechichi was expected in Rome on Tuesday at the invitation of the Italian Premier Giuseppe Conte, after his trip to Paris Monday.

The Italy trip was cancelled after minister of economy Ali Kooli, a member of the delegation accompanying Mechchi, contracted the virus, Tunisie numérique reports.

Several other members of the delegation, including ministers, businessmen, French officials and dozens of Tunisian expatriates in France who met with Mechichi, have been quarantine, the media says.

The North African country Monday reported 1,483 news cases, bringing the infection toll to 113,242 since the report of the first case in February.

41 additional deaths were also reported on Monday, upping the fatalities to 3,956.