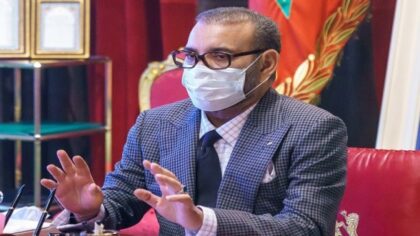 King Mohammed VI has given his high instructions to the government so that all Moroccans benefit for free of the vaccine against the Covid-19.

King Mohammed VI has given his high instructions to the Government to adopt free vaccine against the COVID-19 for the benefit of all Moroccans, the Royal Office said in a statement this Tuesday.

“This noble Royal gesture draws its essence from the high royal solicitude and human benevolence with which the Sovereign has never ceased to surround all the components of the Moroccan people since the appearance of the first cases of this virus in Morocco,” the statement said.

It is also part of the royal guidelines aimed at launching, in the coming weeks, a massive vaccination operation against this epidemic. It aims to guarantee the vaccine for all Moroccans as an adequate means to immunize themselves against the Virus and to contain its spread in the perspective of a gradual return, of the citizens to their normal life in peace and security.

King Mohammed, who had been continuously monitoring the evolution of this pandemic and the measures taken to fight its spread and protect the health and safety of citizens, had chaired on November 9 a working session devoted to the vaccination strategy against Covid-19.

It was then announced that Morocco would launch a massive vaccination operation against Covid-19 to end the acute phase of the pandemic.

This unprecedented nationwide operation aims to provide the population with a vaccine as an appropriate immunization means against the virus and controlling its spread, the Royal Office had said after King Mohammed VI chaired a working session dedicated to the vaccination strategy against the coronavirus.

On the basis of the opinion expressed by the ad hoc National Scientific Committee, which stressed that the vaccination campaign is a genuine response to end the acute phase of the pandemic, and faithful to the proactive royal approach adopted since the appearance of this virus, the Monarch gave his guidelines for the launch, in the coming weeks, of a massive vaccination operation against Covid-19, the Royal Office had said.