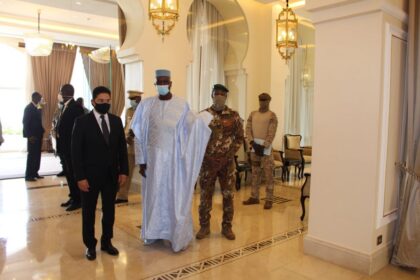 Morocco has sent Mali a message of support, friendship and solidarity with the Malian authorities and people following the important developments unfolding on the ground for a peaceful transition.

The message was conveyed Tuesday by Moroccan Foreign Minister Nasser Bourita, who, upon the instruction of King Mohammed VI, paid a visit to Bamako.

Bourita reaffirmed Morocco’s commitment to accompany Mali through this important phase of its history, noting that the North African Kingdom has always put the interest of the Malian people above all conjectural and political considerations.

Morocco is ready to support all priorities and all programs to be set out by Malian authorities during this transition period, he stressed, adding that his visit conveys to the Malian people and all political actors a message of solidarity and friendship for the success of their transition and for a better future.

Morocco is convinced that “Malians can sort out their own issues by themselves and do not need an internationalization of their problems”, said  Bourita.

The Foreign Minister’s interlocutors expressed their gratitude to King Mohammed VI and to Morocco for their solidarity with the Malian people, underlining that the Kingdom’s support to Mali reflects a long history that unites the two peoples.

The Moroccan delegation’s visit mirrors sympathy and friendship towards the Malian people, and reflects notably what the Commander of the Faithful, King Mohammed VI, represents for Mali, as put by Imam Mahmoud Dicko.
“On all occasions when Mali was going through difficult situations, Morocco was the first country to come to its aid,” Imam Dicko said.

Morocco has always rushed to help its African friends and stood by their side during difficult times when others have abandoned them, walked out turning into bystanders.

Morocco’s friendship with African countries is not transient but permanent, strong and deeply rooted in shared history. It has been tested many times and especially during Covid-19 pandemic, natural catastrophes (droughts, floods…)

Under the leadership of King Mohammed VI, Morocco’s support and solidarity-based cooperation with African countries has gained momentum, becoming a model of South-South cooperation.

Mali is one of Morocco’s long-time friends in the continent. The landlocked West African country is one of the largest on the continent. For centuries, its northern city of Timbuktu was a key regional trading post and center of Islamic culture. The arid former French colony is facing jihadists in the North and central region.

Last month, Morocco called for a “peaceful transition” in Mali enabling a return to the constitutional order after President Ibrahim Boubacar Keita was overthrown following months of mass protests.

Mr.N’daw’s primary mission is to steer a transitional government for a period of 18 months until elections. The appointment of a civilian president and PM was a condition for ECOWAS to lift the sanctions it imposed on Mali following the coup.