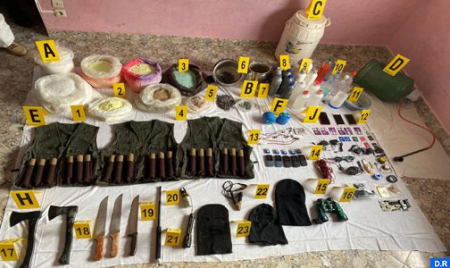 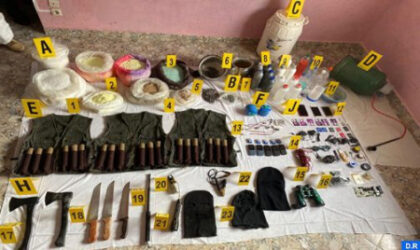 The results of an expertise carried out by the forensic science laboratory reveal that all the materials seized during the dismantling of the terrorist cell on September 10, are used in the manufacturing of explosive charges.

The Attorney General at the Rabat Court of Appeal announced on Saturday that the materials seized by Morocco’s anti-terror bureau (BCIJ) on September 10 are used in the manufacture of explosive devices.

In a statement, the Attorney General said scientific and technical expertise, carried out by the forensic science laboratory, found out that the materials are sensitive and could explode with simple exposure to heat.

The pressure cookers, cylindrical tubes and explosive vests seized in the raid are used to prepare explosive devices that project nails and metal screws when triggered remotely by electrical circuits or by pressure on vests.

The expertise also confirmed a complete match between the chemicals, liquids, gas bottles and light bulbs seized in the different places inspected.

The BCIJ (Central Bureau of Judicial Investigation) arrested five suspects for their affiliation with ISIS on September 10 in the Northern city of Tangier, and in Tiflet, Skhirat, and Temara near Rabat.