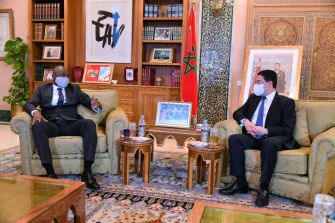 Goita has emerged as Mali’s strongmen gearing the transition in the country since the ousting of President Boubacar Keita following a coup last August 18, 2020.

His Morocco visit, during which he is expected to discuss bilateral cooperation with Moroccan officials, mirrors Rabat’s key role in favor of regional stability and security, notably in the Sahel, a region beset with growing terrorist threat.

It also reflects the trust that Morocco enjoys among Sahel states as a security provider and a trusted partner in the field of economic development.

Bourita had visited Bamako in the wake of the coup and expressed support for the peaceful transition process in Mali.

last week, head of the Moroccan government took part at a G5 security summit and voiced Morocco’s support for joint efforts to eradicate the terrorism threat as well as Morocco’s willingness to back Sahel countries in their counter-terrorism and deradicalization efforts.