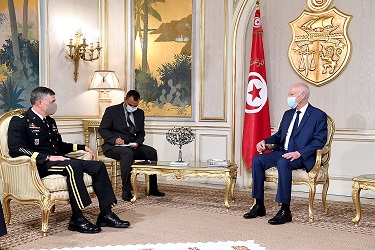 Tunisia and the US Wednesday pondered over ways to increase their military cooperation as President Kais Saied met with Stefen Townsend, commander of the United States Africa Command (AFRICOM).

In his discussions with President Saied, Townsend focused on US partnership with Tunisia, as well as shared concerns over regional stability and the desire to degrade violent extremist organizations.

The US-Tunisian partnership and efforts to enhance security and stability within Tunisia and the region were also discussed at a meeting between Townsend and Tunisian Minister of Defense Ibrahim Bartagi.

While in Tunisia, Townsend also met with the US Ambassador to Libya, Richard Norland. During the meeting, the two spoke via video conference call with newly-appointed Libyan Minister of Defense Salah Eddine al-Namrush to reiterate US support for continued intra-Libyan dialogue under the UN-led process.

Townsend and Norland also conveyed US support for Libya’s counter-terrorism efforts, security sector reform, and calls for the departure of all foreign military and mercenary forces from Libya.

North Africa Post's news desk is composed of journalists and editors, who are constantly working to provide new and accurate stories to NAP readers.
NEWER POSTMorocco chairs board of directors of Arab Union of Electricity
OLDER POSTArab FMs commend King Mohammed VI for his efforts to protect Al-Quds