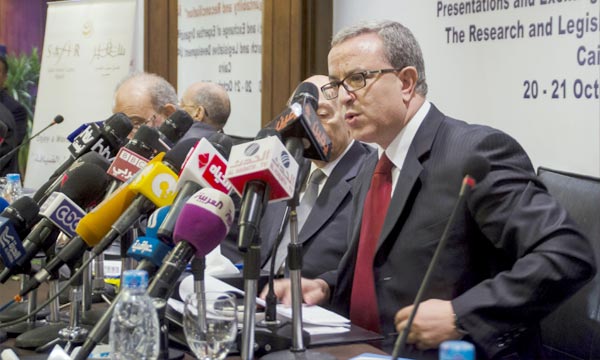 Former Moroccan minister of Justice Mohamed Aujjar has been appointed by the UN High Commissioner for Human Rights Michelle Bachelet as chair of the Independent Fact-Finding Mission on Libya.

The High Commissioner announced Wednesday the appointment of the members of the Independent Fact-Finding Mission on Libya. The members are: Mohamed Aujjar, chair, (Morocco); Tracy Robinson (Jamaica); and Chaloka Beyani (Zambia and UK).

Mohamed Aujjar held the portfolio of Justice from April 2017 until October 2019 when a government reshuffle took place.

In November 2002, Mr. Aujjar was appointed Minister of Human Rights in the cabinets of Driss Jettou and Abderrahmane Youssoufi, a position he held until June 2004.

Mohamed Aujjar was also Morocco’s permanent representative to the United Nations Office and other international organizations in Geneva between October 2014 and April 2017.

Bachelet said that the deteriorating security situation in Libya and the absence of a functioning judicial system underscored the importance of the work of a team of independent experts to document human rights violations and abuses.

The Fact-Finding Mission on Libya was established by the Human Rights Council on 22 June 2020, inter alia, to document alleged violations and abuses of international human rights law and international humanitarian law by all parties in Libya since the start of 2016.

“This body of experts will serve as an essential mechanism to effectively address the widespread impunity for human rights violations and abuses committed, and can also serve as a deterrent to prevent further violations and contribute to peace and stability in the country,” said Bachelet.

Summary executions and other unlawful killings, torture and ill-treatment, gender-based violence, including conflict-related sexual violence, abductions, enforced disappearances, as well as incitement to violence on social media, continue to be committed in a climate of complete impunity, Bachelet added.

The Independent Fact-Finding Mission on Libya will provide an oral update at the Human Rights Council in September 2020. A comprehensive written report on the situation of human rights in Libya, including on efforts to prevent and ensure accountability for violations and abuses of human rights with recommendations, will follow in 2021.

North Africa Post's news desk is composed of journalists and editors, who are constantly working to provide new and accurate stories to NAP readers.
NEWER POSTThe army to the rescue as covid-19 cases surge in Marrakech
OLDER POSTMoroccan tomato exports under attack by Eurasian Union