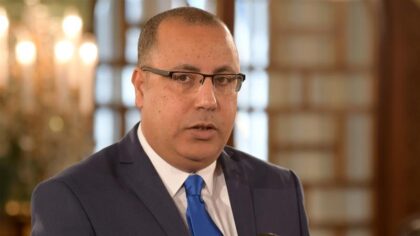 President Kais Saied of Tunisia designated Saturday caretaker Interior Minister Hichem Mechichi as Prime Minister in replacement of Elyes Fakhfakh who resigned few days ago on the backdrop of conflict of interest case levelled against him.

The 46-year old lawyer was chosen by the Tunisian leader who scorned various candidacies proposed by parties represented in the parliament.
Tunisia has been embroiled in a political crisis opposing Saied, Fakhfakh on one side and the leading party in the legislature, Ennahdha on the other.

Nominated early January, Fakhfakh had tumultuous relations with the moderate Islamist party that he accused before his resignation of orchestrating smear campaign against him on allegations that there is a conflict of interest as he is still shareholder in a company even after his appointment as Premier.

The former finance minister last week subsequently carried out a minor cabinet reshuffle and sacked six ministers of the cabinet, all of whom belong to Ennahdha party.

Hichem Mechichi has one month to appoint his cabinet and get the parliament confidence vote. Upon his appointment, Mechichi, who is also one of the President’s advisers, vowed to form a cabinet that meets the aspiration and legitimate rights of all Tunisians.

Mechichi is coming in as the North African country strives to mitigate the socio-impact of the covid-19 pandemic on the nation.

Tunisia has reported 1,452 cases among which 50 deaths. The novel disease has hit the economy because of the nationwide lockdown and the closure of air, sea and land borders in a move to curb the spread of the disease.

Authorities have begun a gradual reopening of the country and international flights have resumed.

Luxemburg national carrier, Luxair, was the first European airliner to land in Enfidha-Hammamet international airport last week with a group of 149 European tourists onboard, in a sign of resumption of travel industry and tourism in the North African country.