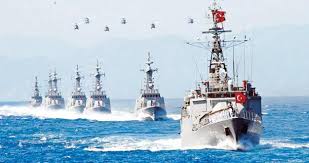 The Turkish Ministry of National Defense will soon carry out large-call naval exercises off the Libyan coast to prove ability to control the region by air and sea, amid tensions with France over the oil-rich African country.

The drills, to prepare the navy forces for a potential war east of the Mediterranean, will take place soon in light of recent escalations of tensions in Libya, MEMO said, adding that the drills will involve 17 warplanes and eight naval vessels.

Turkey has been embroiled in the diplomatic tussle with France over Libya, with Paris accusing Ankara of occupation.

Turkey since November has been supporting the UN-backed Government of National Accord (GNA) opposed to rebel military forces led by retired Gen. Khalifa Haftar backed by France, Russia, US, Egypt and UAE.

France also charged the Turkish navy of harassing a French naval vessel in the Eastern Mediterranean last month while trying to inspect a cargo ship suspected of carrying weapons to Libya.

The European country, in protest to the alleged harassment, temporarily suspended its participation in Operation Sea Guardian – operation to patrol the Mediterranean and in particular along the coast of Libya, in an attempt to enforce the UN arm embargo on the North African country.