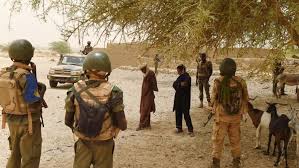 “What is killing us isn’t coronavirus but war.” These were words of Mayor Ali Dolo, after terrorists attacked his community in central Mali.

According to one of the victims, gunmen on motorbikes struck several villages near the town of Bandiagara in central Mali’s Mopti region on Tuesday. The assailants made off with some 500 head of cattle.

Twelve people were killed in the attack. The toll was also confirmed by an internal United Nations report seen by AFP.

Central Mali has become the epicenter of violence in the vast semi-arid country, where ethnically motivated killings and jihadist attacks are now common.

Despite the presence of thousands of French and UN troops, the conflict has engulfed the center of the country, and spread to neighboring Burkina Faso and Niger.

Militant attacks in Mali often have an ethnic dimension. The pastoralist Fulani people are accused of being close to jihadists, a perception which has led to tit-for-tat massacres between them and traditional hunters.