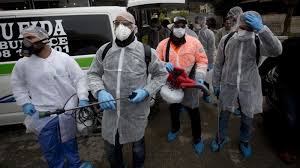 The World Bank has granted the Palestinian Authority (PA) $6 million to help it meet medical challenges amid the spread of the Coronavirus pandemic, the Palestinian Press Agency (SAFA) reported.

The Washington-based institution announced the grant Friday indicating that money will be used to enable the PA to meet the urgent health requirements for the fight against the pandemic.

It is the second fund by the World Bank about a week after a first $800,000 grant, for the same purpose.

The PA which controls the West Bank reported 6 new case as of Saturday, bringing the overall infection toll to 216. The disease was first reported on Palestinians working in Israeli settlements. Israel has confirmed 8,611 cases.

While the infection overall figure hit 216 in the West Bank, Hamas which controls the Gaza strip announced Saturday a reduction of the number of cases after five of the 12 cases confirmed in the enclave recovered, Times of Israel reports.

Hamas announced the first cases after two men who attended a religious conference in Pakistan tested positive upon their return.

The first two cases in Gaza City, Gaza were diagnosed on March 21. The Palestinian health ministry said the cases had first been detected at a hotel in the Bethlehem area. A group of Greek tourists had visited the hotel in late February. Two of them were later diagnosed with the virus.