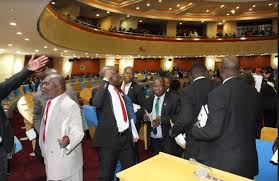 The parliament of Malawi has passed a law that sets 19 May 2020 as the date for fresh presidential elections.

The Constitutional Court also found that less than a third of the results from the more than 5,000 polling stations had been certified by the auditors by the time the electoral commission declared Mutharika as the winner of the presidential race.

The challenge was brought by two opposition candidates – Lazarus Chakwera and Saulos Chilima – whose lawyers said some tallying forms had been doctored with Tipp-Ex, and that some polling officials sent in the wrong copy of the results sheet to the main tallying center.

The new law passed on Monday includes provision for a run-off presidential election to be held if no candidate wins a 50% plus one majority.

Parliament also passed a bill to ensure that the electoral commission’s chairperson is first nominated by the Judicial Service Commission, then appointed by the president on the recommendation of the Public Appointments Committee.

Since 2014, Mutharika, a 79-year-old former law professor, has managed to rein in rising prices of basic goods and improve roads and other infrastructure in the southern African nation.